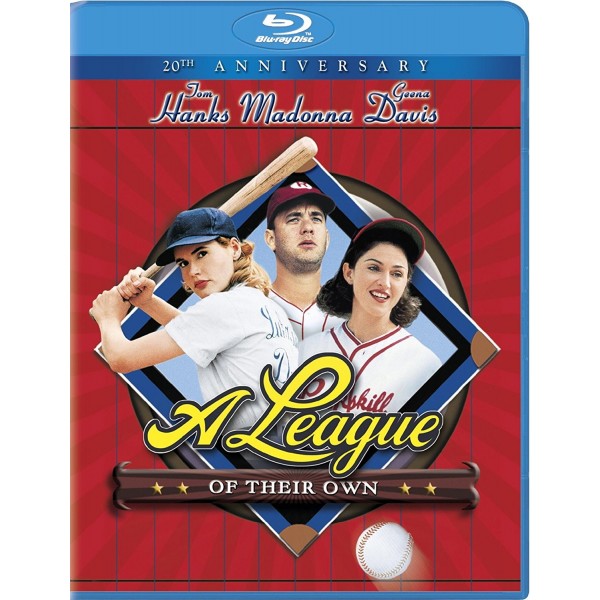 A League of Their Own

Tom Hanks, Geena Davis, and Madonna star in this major-league comedy from the team that brought you Big. Hanks stars as Jimmy Dugan, a washed-up ballplayer whose big league days are over. Hired to coach in the All-American Girls Baseball League of 1943, while the male pros are at war, Dugan finds himself drawn back into the game by the heart and heroics of his all-girl team. Jon Lovitz adds a scene-stealing cameo as the sarcastic scout who recruits Dottie Hinson (Geena Davis), the baseball dolly with a Babe Ruth swing. Teammates Madonna, Lori Petty and Rosie O'Donnell round out the roster, taking the team to the World Series.

This classic 1992 film is now available in a 20th anniversary Blu-Ray edition, which includes a nine-art featurette about the casting and making of the film and the film's legacy.

"Penny Marshall's popular 1992 comedy sheds light on a little-known chapter of American sports history with its story of a struggling team in the All-American Girls Professional Baseball League. The league was formed when the recruiting of soldiers during World War II resulted in a shortage of men's baseball teams. The AAGPBL continued after the war (until 1954), and Marshall's movie depicts the league in full swing, beginning when a savvy baseball scout (Jon Lovitz) finds a pair of promising new players in small-town Oregonian sisters (Geena Davis, Lori Petty).... [T]he stellar cast is delightful, and the movie's filled with memorable moments, witty dialogue, and agreeable sentiment. And just remember: there's no crying in baseball!" — Jeff Shannon, Amazon.com Reviews