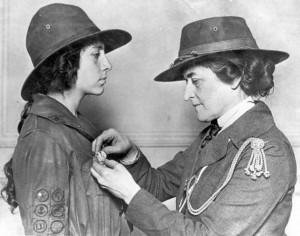 Juliette Gordon Low pinning a badge on a Girl Scout circa World War I. Credit: The Girl Scouts

Today in Mighty Girl history, Juliette Gordon Low, the founder of Girl Scouts in the United States, was born in 1860. Born in Savannah, Georgia, Low, known as "Daisy" to friends and family, spent much of her early adulthood traveling extensively and exploring the world. In 1911, she discovered a new passion when she met former English General Robert Baden-Powell who had recently founded the Scouting movement in the UK. Baden-Powell has also recruited his sister Agnes to organize the Girl Guides and new scout troops were springing up across England.

Inspired to bring the new movement to America, Low returned to the US in 1912 and made a historic call to her cousin, Nina Anderson Pape where she stated: "Come right over! I've got something for the girls of Savannah, and all of America, and all the world, and we're going to start it tonight!" The two women recruited girls from throughout Savannah and, on March 12, 1912, held the first meeting of the American Girl Guides. By 1913, the group was thriving with Low as president, and the organization's name was changed to "Girl Scouts."

In the final years of her life, Low dedicated her energy to building the global scouting movement. She believed that "Girl Guiding and Girl Scouting can be the magic thread which links the girls of the world together." 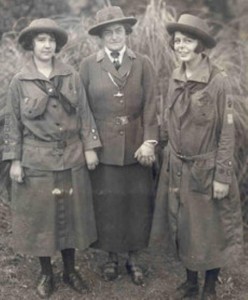 Following her death in 1927, Low was buried in Savannah in her Girl Scout uniform and friends created the Juliette Low World Friendship Fun to honor Low's love of travel and cultural exchange. To this day, the Fund supports international friendship by funding Girl Scout exchange visits, service projects, and travel to global events.

Through her founding of the Girl Scouts, Low has left a tremendous legacy. Today in the US, there are 3.2 million Girl Scouts -- 2.3 million girl members and 880,000 adult members working primarily as volunteers. More than 50 million American women enjoyed Girl Scouting during their childhood and, many have been inspired by the Girl Scouts Law to "make the world a better place, and be a sister to every Girl Scout."

For more stories of adventurous girls and women, visit our section on explorers and adventurers.