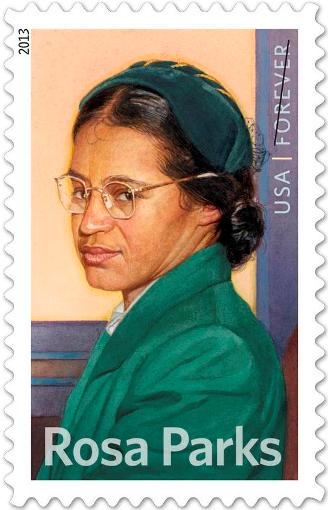 On this day in Mighty Girl history, we remember Rosa Parks who was commemorated on this stamp released today on what would have been her 100th birthday. Dubbed “the first lady of Civil Rights” and “the mother of the freedom movement” by the United States Congress, Parks is most often remembered for her refusal to give up her seat on a bus to a white passenger in Montgomery, Alabama in December of 1955. This act of courage and defiance sparked the Montgomery Bus Boycott, one of the pivotal events in the US Civil Rights Movement.

This was not her first, nor would it be her last, contribution to the Civil Rights Movement. In fact, she had been a member and the secretary of the Montgomery chapter of the NAACP for 12 years prior to the bus boycott. She also attended the Highlander Folk School, a social justice leadership training school, the summer before refusing to give up her bus seat.

Parks and her husband moved to Michigan shortly after the bus boycott as a result of losing their jobs. There, Parks was hired as receptionist for U.S. Representative John Conyers Detroit office, where she worked until she retired in 1988. Rosa Parks received many awards and accolades in her life, most notably the Presidential Medal of Freedom and the Congressional Gold Medal.

She died in October of 2005, and was given memorial services to reflect her heroic legacy in Detroit, Montgomery, and Washington, D.C. She was the first woman in history to lie in state in the capitol rotunda, as well as the first American who was not a government official and the second African-American to do so.

Rosa Parks’ impact on American history is undeniable. As she put it, “Racism is still with us. But it is up to us to prepare our children for what they have to meet, and, hopefully, we shall overcome.”

For several excellent books about Rosa Parks’ life for children and teens, as well as a wonderful film about her story, visit our Rosa Parks Collection.