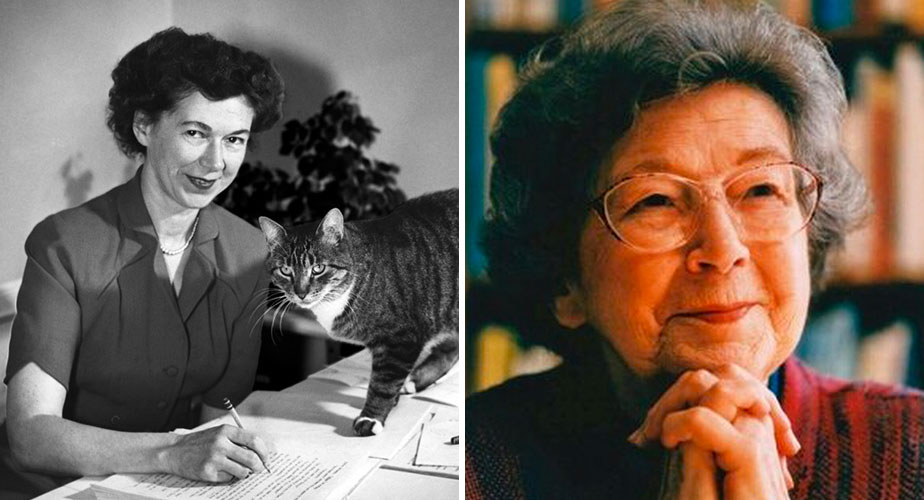 For decades, children have delighted in the adventures of Ramona and her sister Beezus, Henry Huggins and his dog Ribsy, and Ralph, the motorcycle riding mouse! Although these books were written long ago, their characters feel like they could still be living in the house next door thanks to the remarkable writing of their author, Beverly Cleary, who celebrated her 104th birthday this year! When asked about the multi-generational appeal of her books, Cleary credits the spirit of childhood which she believes is just as timeless as her stories. "I think deep down inside children are all the same," she told NPR in a 2006 interview. "They want two loving parents and they would prefer a house with a neighborhood they can play in. They want teachers that they can like. I don't think children themselves have changed that much." 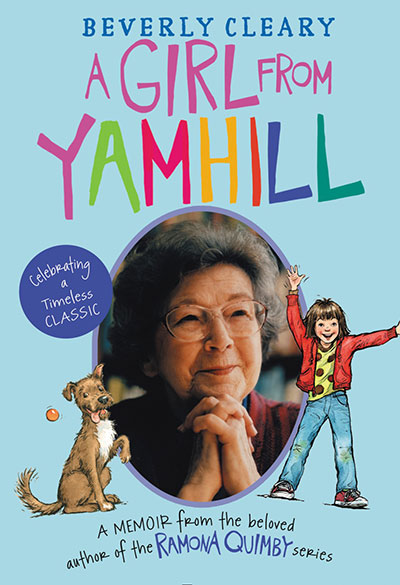 Cleary was born in 1916, and lived on a farm in rural Yamhill, Oregon until she was 6 years old. Then her father got a job as a bank security officer in Portland, and the family moved to the city. The adjustment was difficult on Cleary, and she felt even worse when her first grade teacher put her in a group for struggling readers. "The first grade was separated into three reading groups — Bluebirds, Redbirds, and Blackbirds. I was a Blackbird. To be a Blackbird was to be disgraced. I wanted to read, but somehow could not," she later reflected. Her reading difficultly was magnified by the phonics lists and Dick and Jane stories that were used for reading instruction at the time. "[We] wanted action," she wrote in her memoir, A Girl from Yamhill. "We wanted a story."

Fortunately, a school librarian realized what Cleary needed, and introduced her to books that she enjoyed. By the third grade, she had caught up in reading ability, and by sixth grade, she was an avid reader and writer. Her sixth grade teacher even suggested that she should become a children's writer based on the quality of her class assignments. Her passion for reading led Cleary to pursue a career as a children's librarian, and she earned a Bachelor of Arts Degree in English at the University of California at Berkeley in 1938, followed by a Master's Degree in Library Science at the University of Washington in 1939.

She began working as a children's librarian in Yakima, Washington in 1939, and then as the post librarian at the U.S. Army Hospital in Oakland, California. Her conversations with the children she served, however, turned her thoughts back to writing as she struggled to find books to recommend to her young patrons with characters they could relate to. "I think children want to read about normal, everyday kids," she said in a 1999 interview. "That's what I wanted to read about when I was growing up. I wanted to read about the sort of boys and girls that I knew in my neighborhood and in my school.... I think children like to find themselves in books." Since she couldn't find those books already on the shelves, she set out to write them.

Cleary's first book, Henry Huggins, was accepted for immediate publication in 1950. It was a tremendous success, with kids loving to read stories about characters like Henry and his friend Beezus that reminded them of themselves. Then Cleary noticed that all of the children in her book seemed to be only children, so on a whim, she gave Beezus a little sister. 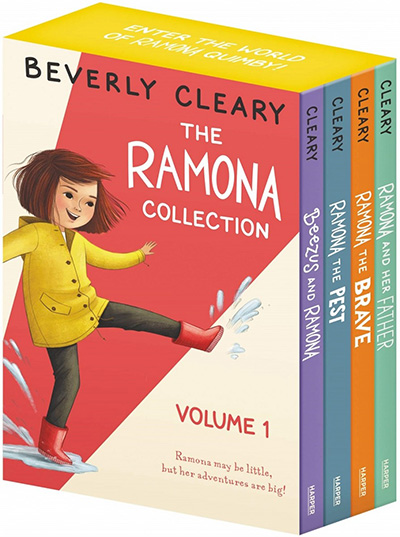 "Ramona just appeared on her own," Cleary says, "and kept growing in each book." It wasn't long before Cleary and her editor decided Ramona needed her own books. Ramona Quimby would end up becoming one of Cleary's most popular characters as she grew from a rambunctious preschooler in Beezus and Ramona into an imaginative and empathetic fourth grader in Ramona's World.

Cleary kept writing until the late 1990s, and she always tried to keep the interests of her audience in mind. "I really wrote [The Mouse and the Motorcycle] for my son when he was in about the third grade and was disillusioned with school and reading and I said, well, what would you like to read about? And he said motorcycles," she recalled in an interview. "Then we were traveling in England and he was sick in bed for a couple of days and we bought him some miniature cars and a little motorcycle to play with.... And when we came home, a neighbor called me over to show me a mouse that had fallen into a bucket in her garden, and it crossed my mind that that mouse was just the right size to ride that motorcycle." To date, she says The Mouse and the Motorcycle is still one of her most popular books among boys.

In addition to being beloved by kids for generations, Cleary's work is widely critically acclaimed. She won a Newbery Medal for Dear Mr. Henshaw and Newbery Honors for Ramona Quimby, Age 8 and Ramona and Her Father, as well as the 1981 National Book Award for Ramona and Her Mother. Her books have sold 91 million copies and been published in over 25 languages, and in recognition of her contributions to children's literature, she received the 1975 Laura Ingalls Wilder Award from the American Library Association for her "substantial and lasting contributions to children's literature." She was also named a Library of Congress Living Legend in 2000 and received the National Medal of Arts in 2003.

Looking back at the end of her long career, Cleary reflects that what makes her work so enduring is largely thanks to her keen ability to remember what it's like to be a child and evoke those memories in her stories. "I'm just lucky," she insists. "I do have very clear memories of childhood. I find that many people don't but I'm just very fortunate that I have that kind of memory." All in all, she says, "I've had an exceptionally happy career."

Books By and About Beverly Cleary 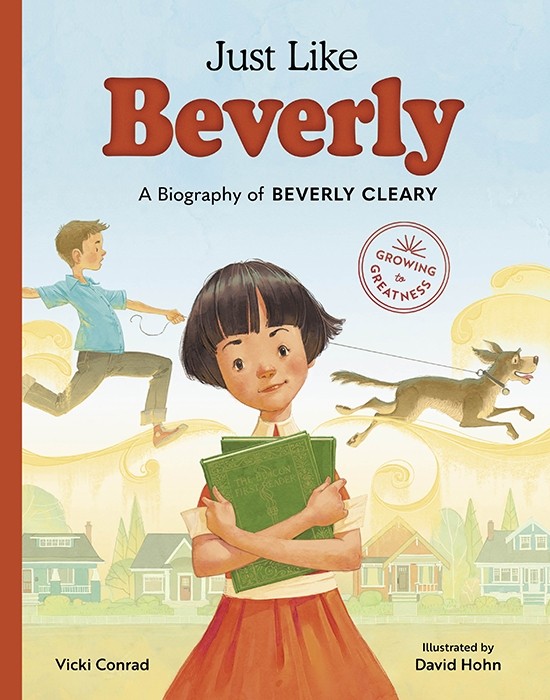 If you love Ramona Quimby then you know the name Beverly Cleary! But you might be surprised to learn that when Beverly was a girl, she struggled with reading. Not only did she find it hard, but the books she had to read were boring — she wanted to read stories about kids like her! With the help of supportive parents and an encouraging teacher, she learned to read and discovered a gift for writing, eventually becoming a beloved and award-winning writer — one of the most famous children's authors of all time. This narrative nonfiction picture book introduces young readers to Cleary's life and urges them to consider what their own futures might hold. 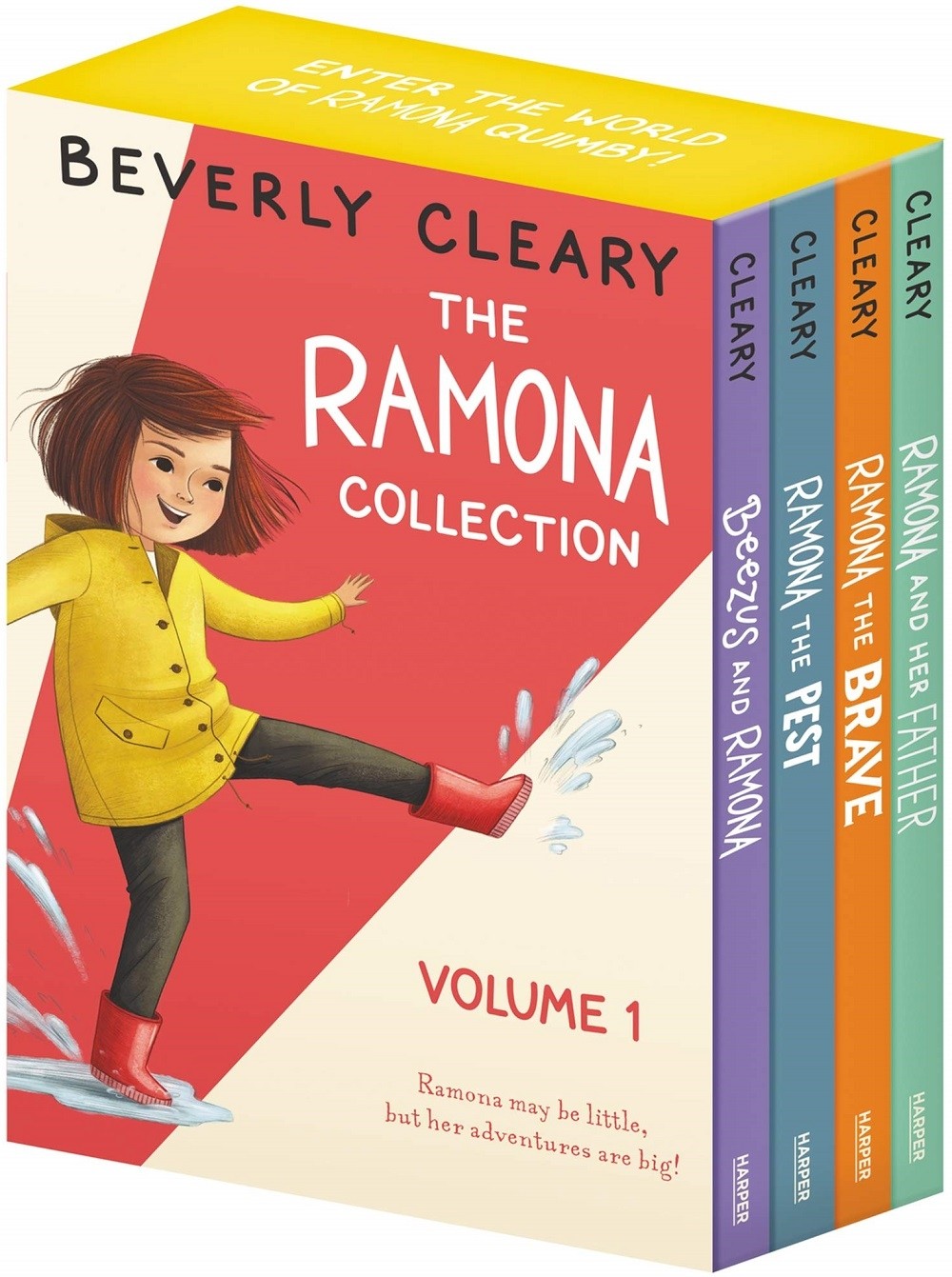 Meet the inimitable Ramona Quimby in this box set that collects the first four books of the series! This collection includes paperback editions of Beezus and Ramona, Ramona the Pest, Ramona the Brave, and Ramona and Her Father. Although things don't always go smoothly despite Ramona's good intentions, she stays optimistic, confident that the people who love her will help her get through any challenge. For more of the series, check out The Ramona Collection, Volume 2 or the Ramona Quimby Box Set which includes the entire series. 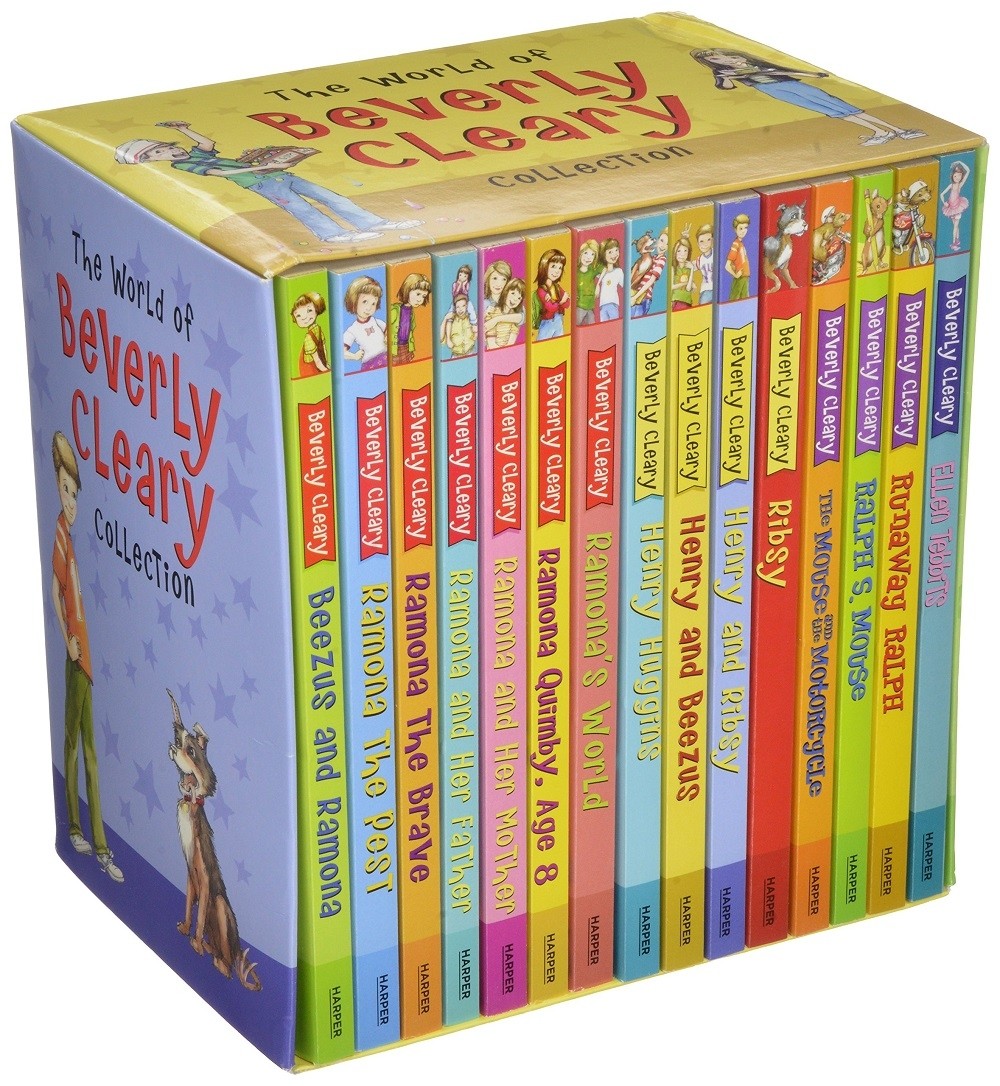 Celebrate beloved children's author Beverly Cleary with this incredible collection of all her most popular books! In this box set kids will find fifteen paperback books, including seven Ramona Quimby stories — Beezus and Ramona, Ramona the Pest, Ramona the Brave, Ramona and Her Father, Ramona and Her Mother, Ramona Quimby, Age 8, and Ramona's World — as well as Henry Huggins, Henry and Beezus, Henry and Ribsy, Ribsy, The Mouse and the Motorcycle, Ralph S. Mouse, Runaway Ralph, and Ellen Tebbits. It's the perfect choice for any fan of Cleary, young or old!

A Girl from Yamhill: A Memoir 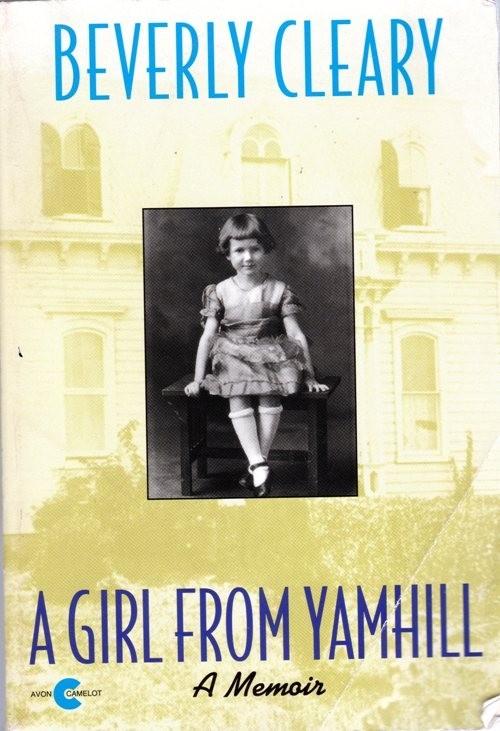 A Girl from Yamhill: A Memoir

Beloved author Beverley Cleary has been a part of generations of childhoods: from Ramona and Beezus to Henry Huggins and Ralph the Mouse, her books have sold millions of copies and delighted even more young readers! In this charming memoir, Cleary tells the story of her adolescence in Depression-era Oregon, including her struggles with reading, her problems with the rules for good behavior, and the conflict between expectations and her still-nebulous dreams. Fans of Cleary's work will also recognize anecdotes that inspired some of their favorite stories! To continue Cleary's story, check out My Own Two Feet: A Memoir, which follows Cleary from college to the publication of her first book. 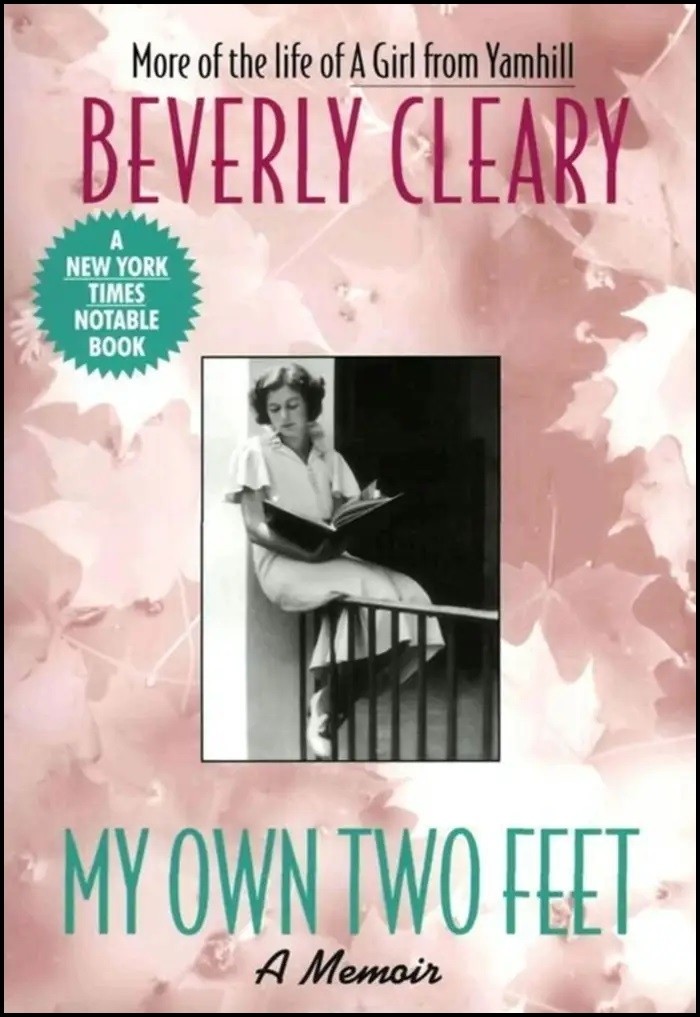 Beverly Cleary continues her memoirs with this tale of her journey from life as a college student to published author. When she left Oregon in 1934 to go to college in California, she imagined it as an escape from the hardship of the Great Depression. Her love of libraries led her to work as a children's librarian, and she delighted in finding the right book for each child. But when kids asked, "Where are the books about kids like me?" she couldn't find them — so she decided to write one, launching a career as a writer. Lively and delightful as Cleary's characters, this memoir is a charming look at how Beverly Cleary became one of America's favorite children's authors.