Saleha Jabeen was commissioned as a second lieutenant by the Air Force Chief of Chaplains, who said, "Any time we advance religious freedoms, it’s a win for all persons of faith."

In a ceremony filled with family, friends, and mentors, Saleha Jabeen made history by becoming the first female Muslim chaplain in the history of the U.S. military! At the December ceremony in Chicago, Jabeen was commissioned as a second lieutenant by the Air Force Chief of Chaplains, Major General Steven Schaick. "Any time we advance religious freedoms, it’s a win for all persons of faith," asserted Schaick. "The fact is America is a place where the Constitution guarantees your freedom to embrace or abstain from religious ideals, and the Chaplain Corps, which Jabeen just entered, exists to ensure every Airman has a religious freedom advocate.... I could not be more proud of our Air Force for being willing to commission and embrace the first female Imam in the Department of Defense." 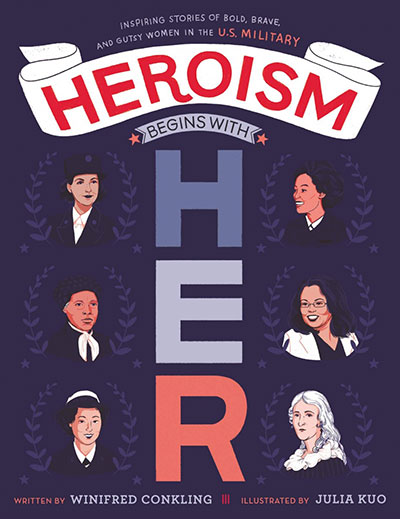 A female chaplain is already a rare sight in the military; in November 2019, the Office of the Secretary of Defense reported that there were 161 female chaplains in all service branches, including the Coast Guard, compared to 2,647 male ones. Military chaplains are religious ministry professionals who support the spiritual needs of military personnel and their families, and while Muslim chaplains have served in the U.S. military since 1993, there has never been a female Imam. As the first woman to ever serve in this capacity, Jabeen received the Ecclesiastical Endorsement from the Islamic Society of North America.

When the Indian-born Jabeen first came to the US fourteen years ago, a military career was not in her plans: "I thought I would study and make an impact in the corporate world," she recalls. After her brother joined the Army, however, she gained a new appreciation for military service and the impact she could have there. "It was because of his dedication and getting to see his military career that I recognized the importance of the chaplaincy in the armed forces," she says. "I saw that when one member gets deployed, all of their family members join them."

After graduating from the Catholic Theological Union in 2014, where she was the first Muslim woman chosen as valedictorian by her graduating class, Jabeen served in the U.S. Army Reserve from 2016 to 2018.  As a chaplain candidate, she expects to complete officer training this summer at Maxwell Air Force Base in Montgomery, Alabama, after which she will be assigned her first duty station.

Jabeen says she is looking forward to representing her faith — and helping those in need, in particular, women in the service. "Having a female chaplain is crucial to honor the gender-specific needs of all the female service members in general," she explains. "It is specifically important for female Muslim service members to have a female Chaplain to accompany and to fulfill their needs, in the very practical aspects of religious and cultural sensitivities, as they seek help in moments of vulnerability." And, to anyone contemplating being the first to break a barrier, Jabeen offers this encouraging advice: "When other people look at what I have done, I want them to know that God has a plan for you and to go out there and be the best version of yourself and accomplish the mission you were specifically designed to complete. Don’t let anyone or anything stop you and when they try — be kind, be generous, be resilient and don’t quit."

Books About Trailblazing Muslim Women & Women in the Military 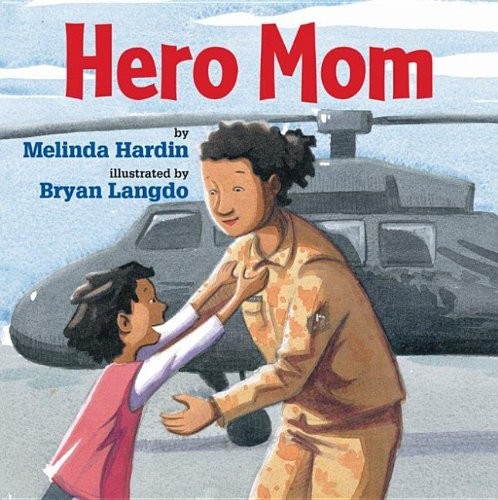 The kids in this book declare, “Our moms are superheroes.” Why? Well, because she flies to the rescue in her helicopter, trains a bomb-sniffing dog, or saves lives in the medical complex. Some moms build tall buildings, or get everything exactly where it needs to go. The fun illustrations and simple text make this a fun read to remind children of military moms just how special their job is — or to teach children who aren’t familiar with the military about the many jobs that soldiers do. For a companion to this book featuring military dads, check out Hero Dad.

The Proudest Blue: A Story of Hijab and Family
New! 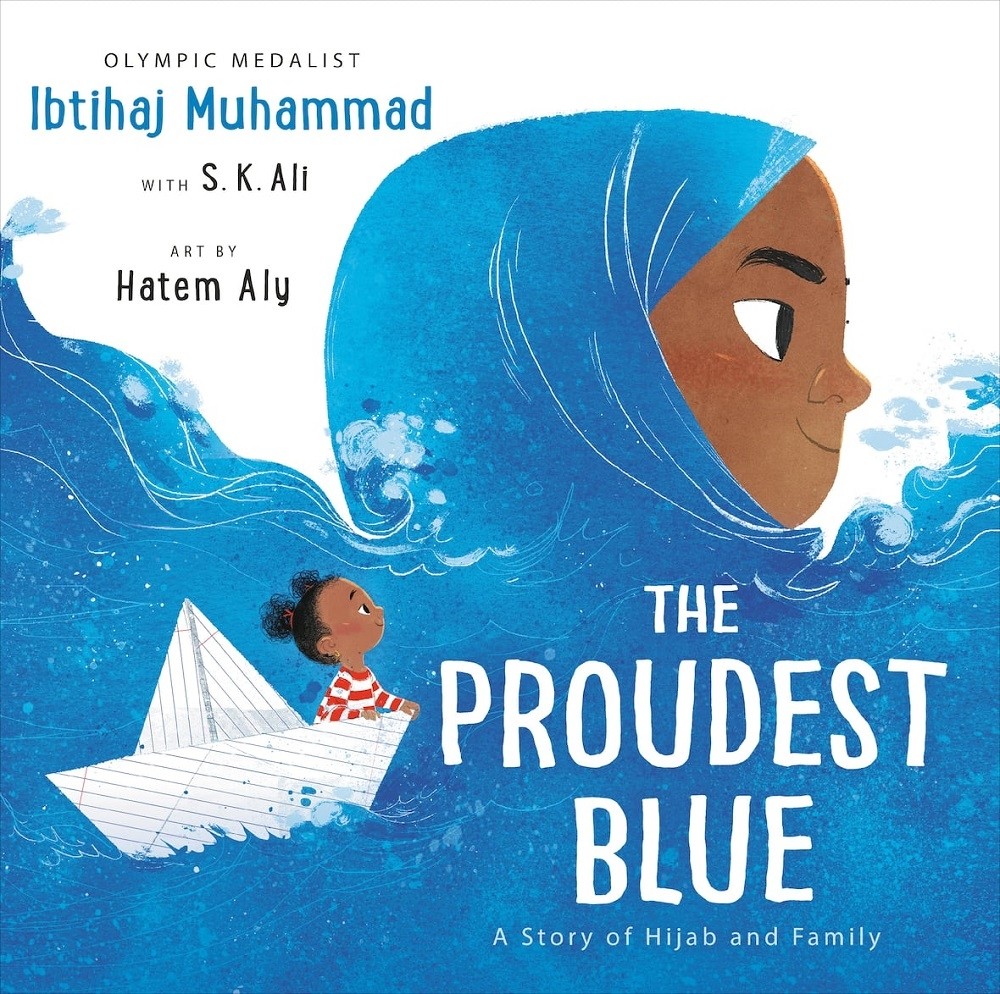 The Proudest Blue: A Story of Hijab and Family
New!

For Faizah's big sister Asiya, the first day of school is also her first day wearing hijab, with a beautiful blue fabric she picked that reminds Faizah of "the ocean waving to the sky." But at school, both a classmate's whispered curiosity and a bully's nasty taunts shake Faizah's confidence. How can people see her sister's hijab as anything but beautiful? Fortunately, with Asiya's example to encourage her, Faizah discovers new strength and pride in the things that make her family unique. Olympic fencing medalist and social justice activist Ibtihaj Muhammad teamed up with S.K. Ali to create this lyrical, uplifting text, while Hatem Aly's vibrant illustrations depict a world of diverse people, supportive friends, and a pair of sisters who are always there for one another.

The stories of the changemakers in this book remind young readers that, contrary to stereotypes, Muslim girls and women are diverse, courageous, and bold! In this volume, kids will read about nineteen 20th century women, from famous names like Malala Yousafzai and Ilhan Omar, to lesser-known figures like squash player Maria Toorpakai Wazir and teacher Muzoon Almellehan. Each two-page spread introduces one person's story and emphasizes their influence on the world, and features vivid illustrations and an inspiring quote for each. This inspiring title is sure to encourage young readers to learn more about these daring women. 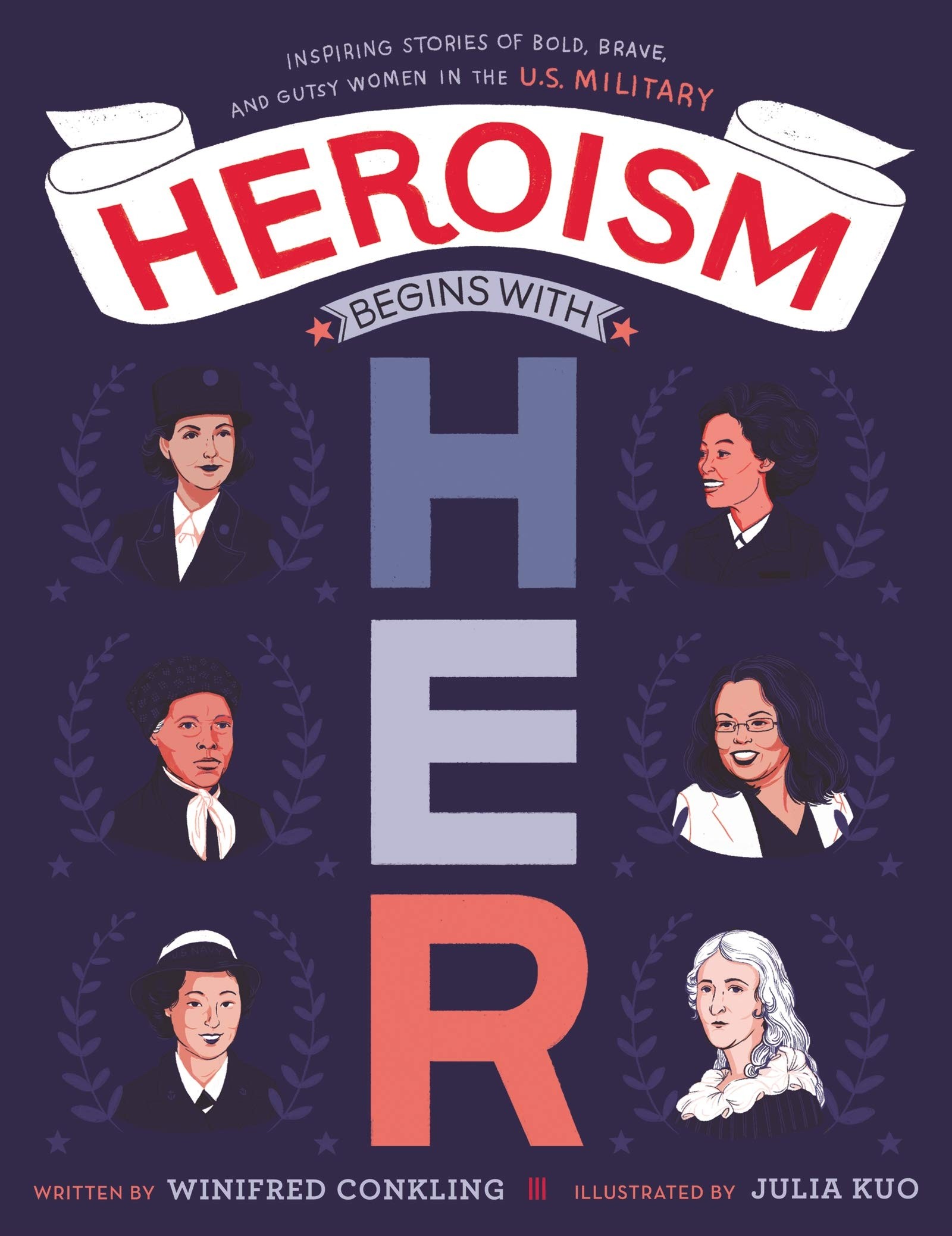 Written by: Winifred Conkling
Illustrated by: Julia Kuo
Recommended Age: 9 and up

From the first days of American history, women have served in the United States military — but too often, their contributions were minimized or overlooked. As Revolutionary War and Civil War soldiers, they had to disguise themselves as men to fight, and even in the 20th century, they were often sidelined, even as they fought to break down barriers and prove they belonged alongside their male counterparts. In this beautifully illustrated book, author Winnifred Conkling introduces readers to courageous women past and present — from Harriet Tubman to Tammy Duckworth — who proudly joined the defense of their nation. 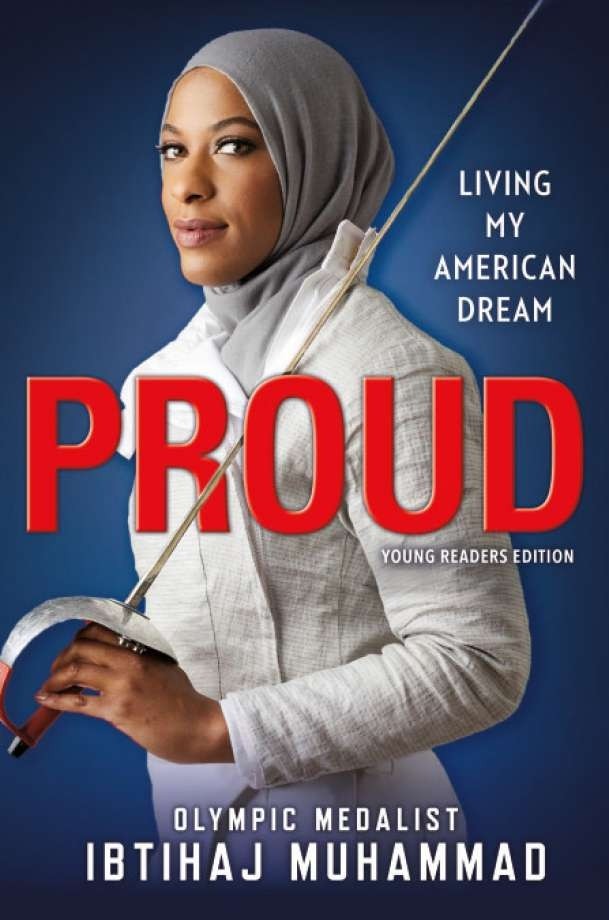 When Ibtihaj Muhammad was in school, she was the only African American Muslim student — and when she discovered a love of fencing, she stood out even more in a sport most popular with wealthy white people. Ibtihaj was fast and hardworking, but as she rose through the ranks, she faced constant scrutiny from those who insisted she was too different to succeed. Instead of listening to them, she persevered and became the first Muslim-American woman to medal at an Olympic Games. This young readers edition of Muhammad's memoir Proud: My Fight for an Unlikely American Dream will inspire kids with her determination, faith, and courage. 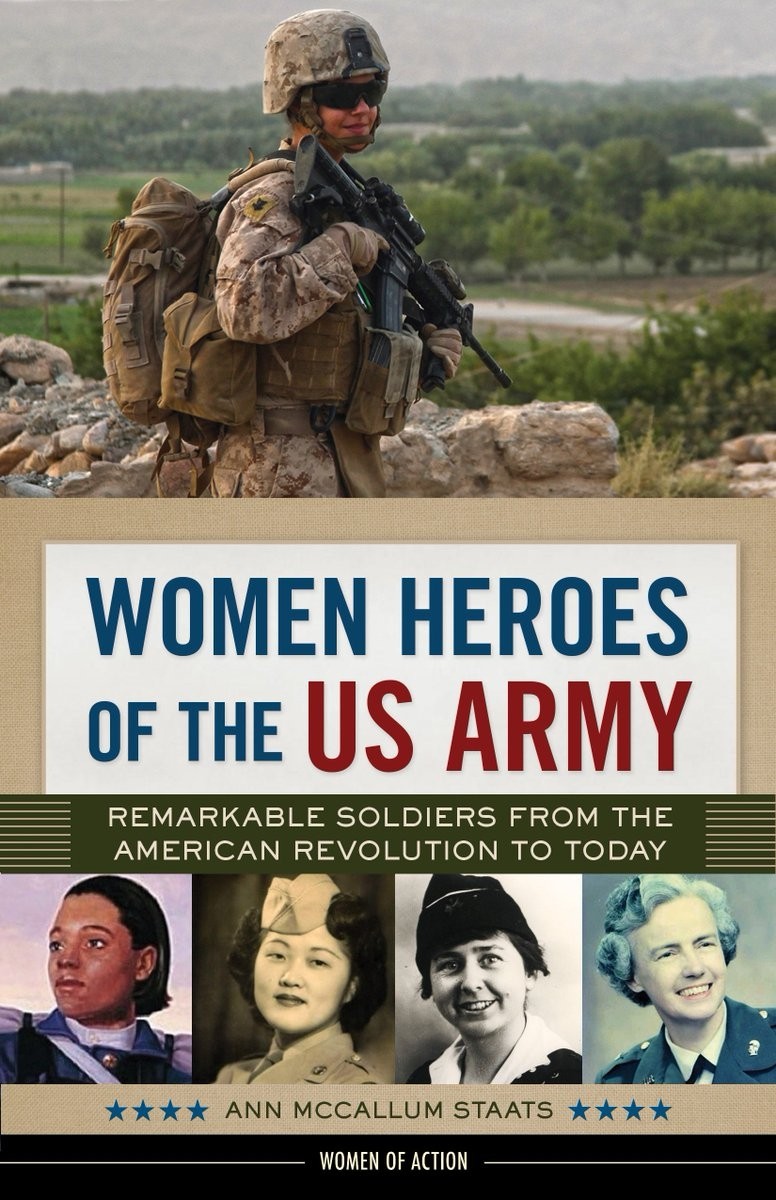 Written by: Ann McCallum Staats
Recommended Age: 13 and up

Since the founding of the United States, women have wanted to serve in the United States Army — and they were willing to break gender and racial barriers, and face skepticism and prejudice, to do so! In this book from the popular Women of Action series, teens will learn about bold women who took their place in the ranks during the Revolutionary War, World Wars I and II, and in the modern Army of today. It's sure to inspire girls who dream of their own time serving the country they love!

Soldier Girls: The Battles of Three Women At Home and At War 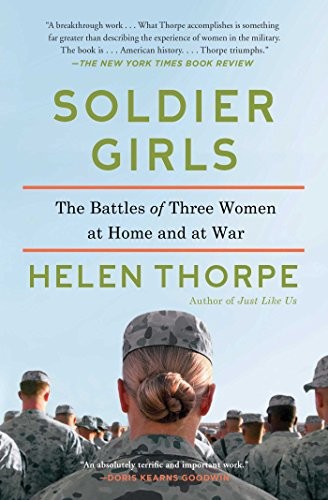 Soldier Girls: The Battles of Three Women At Home and At War

Since 2001, America has been at war — and a sizeable percentage of American soldiers overseas have been women. But the life of a woman in the military, particularly on deployment, is not the same experience as that of a man. Outnumbered by the men in their units, they're simultaneously outsiders and also objects of desire; at home, they're faced with questions about why they would leave the safety of their expected roles to be soldiers. Author Helen Thorpe explores the lives of three women over twelve years in this moving examination of what it means to be a soldier girl.