Say No to the Merida Makeover and Keep Our Hero Brave! 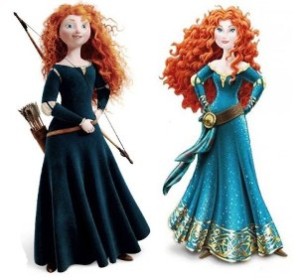 After our post last Friday about the redesign of the beloved character Merida from the film Brave generated over 800 comments in a single day, we were inspired to launch a petition over the weekend calling on Disney to "Say No to the Merida Makeover and Keep Our Hero Brave!" In its first two days, it collected nearly 20,000 signers and today it surpassed 70,000 signers!

The petition focuses on the redesign of Merida in advance of her induction into the Disney Princess collection. In it, we say to Disney:

"Merida was the princess that countless girls and their parents were waiting for -- a strong, confident, self-rescuing princess ready to set off on her next adventure with her bow at the ready. She was a princess who looked like a real girl, complete with the ‘imperfections’ that all people have.

The redesign of Merida in advance of her official induction to the Disney Princess collection does a tremendous disservice to the millions of children for whom Merida is an empowering role model who speaks to girls' capacity to be change agents in the world rather than just trophies to be admired. Moreover, by making her skinnier, sexier and more mature in appearance, you are sending a message to girls that the original, realistic, teenage-appearing version of Merida is inferior; that for girls and women to have value -- to be recognized as true princesses -- they must conform to a narrow definition of beauty.

In an interview with Pixar Portal, "Brave" writer and co-director Brenda Chapman stated, "Because of marketing, little girls gravitate toward princess products, so my goal was to offer up a different kind of princess — a stronger princess that both mothers and daughters could relate to, so mothers wouldn't be pulling their hair out when their little girls were trying to dress or act like this princess. Instead they'd be like, ‘Yeah, you go girl!’”

This new Merida is a paler reflection of her former self without the spark and the 'you go girl' quality that her creator intended.

We write to you on behalf of all the young girls who embraced Merida as a role model, who learned from her that they too could go off on an adventure and save the day; that it's not how you look that matters but who you are. For them and for all the children -- both girls and boys -- who benefit from seeing depictions of strong, courageous, and independent-minded girls and women that are so scarce in animated movies, we ask you to return to the original Merida that we all know and love. We ask you to keep Merida Brave!"

Please help keep up the momentum by signing and sharing if you haven't already and many thanks to those of you who have.

Many signers have shared thoughtful reasons why they are supporting the petition. Here are a few of our favorites:

"The homogenization of the Princess collective over the last several years dilutes the brand rather than strengthening it. The characters have basically become interchangeable, stripped of all their individuality. Is that really the message we want young girls to absorb?" - Bonnie C., Littleton, CO

"There's no need to sexualize a strong, young, active role model. Instead of making Merida fit the princess model, maybe Disney should change the princess model to fit girls like Merida." - Jessica B., St. Paul, MN

"Merida is a beautiful representation of a different type of beauty - natural, real and relatable. If you change Merida's appearance, you are destroying the values of true beauty and objectifying a strong woman." - Colleen, M., Columbus, OH

"As the father of West Point graduates who are still on active duty, we need more role models who take a non-traditional path to life. Let little girls dream big dirty, sweaty dreams that make THEM happy, even if they need a bath afterwards. Keep Merida Brave!!!" - Donald R., Batavia, IL

If you'd like to read more on the why this issue matters, we recommend the following articles:

For those seeking empowering princess stories for your Mighty Girl that feature princesses who are smart, daring, and aren't waiting around to be rescued, visit our Ultimate Guide to the Independent Princess.

A Mighty Girl is one of the world’s largest girl empowerment websites with a collection of nearly 5,000 girl-empowering books, toys, movies, clothing and music for parents, teachers, and others dedicated to raising smart, confident, and courageous girls. The site was founded on the belief that all children should have the opportunity to read books, play with toys, listen to music, watch movies, and wear clothing that offer positive messages about girls and honor their diverse capabilities. It is our hope that these high-quality children’s products will help a new generation of girls to grow and pursue whatever dreams they choose -- to truly be Mighty Girls!

This entry was posted in Misc, Front Page and tagged merida, petition, Disney, princess on May 10, 2013 by Carolyn. ← Previous Post Next Post →