By Carolyn Danckaert and Aaron Smith, A Mighty Girl Co-Founders 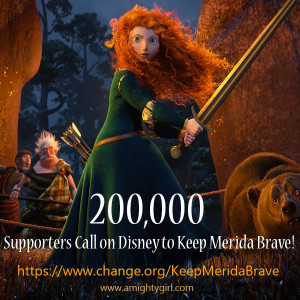 Statement Update: Appended on 5/17/2013 addressing redesign being a part of limited line of products.

Since launching our petition on May 4, A Mighty Girl -- along with more than 200,000 petition signers -- has been calling on Disney to "Say No to the Merida Makeover and Keep Our Hero Brave!" Despite the overwhelming response from both parents and children -- and contrary to reports in various news outlets that Disney has pulled the madeover design -- Disney continues to promote the redesigned, sexier Merida and this version is emblazoned across Target’s Disney Princess Collection website.

In one of their first public statements on the Merida makeover to the Disney industry blog, Inside the Magic, Disney claimed that the madeover Merida is a "one-time stylized version" for the Target Disney Princess line but, as Ricky Brigante writes, "they could not say exactly how she would be depicted alongside the other Disney Princesses." They further asserted, Brigante notes, that Disney "had no intention of changing who Merida is." However, the madeover version of Merida, as seen on the Target website, shows that Disney has already radically changed the beloved character into a pale reflection of her former self.

While numerous news articles have reported "victory" in our campaign to "Keep Merida Brave" due to the fact that the madeover 2D version of Merida does not appear on Disney.com, this assertion is premature. Our campaign has never been focused on the website image but on how Merida will be portrayed now that she is an official part of the Disney Princess collection. While Merida's depiction online is certainly significant, the true test of whether Disney is committed to preserving the original, brave Merida is how she will appear in the extensive Disney merchandise lines and in the Disney Princess collection at large.

As A Mighty Girl has asserted from launch of our petition, the redesign of Merida in advance of her official induction into the Disney Princess collection does a tremendous disservice to the millions of children for whom Merida is an empowering role model who speaks to girls' capacity to be change agents in the world rather than just trophies to be admired. Moreover, by making her skinnier, sexier and more mature in appearance, you are sending a message to girls that the original, realistic, teenage-appearing version of Merida is inferior; that for girls and women to have value -- to be recognized as true princesses -- they must conform to a narrow definition of beauty.

In a recent interview with A Mighty Girl, "Brave" writer and co-director, Brenda Chapman described the changes to the character she created: "Look at the attitude. Look at how she’s posed. Look at how much tinier her waist is and how much bigger her boobs are. Look at the off the shoulder dress. It’s just that they have sexed her up. And you can look at the childlike proportions of the real Merida’s face and her body and see that she’s not fully a woman yet, but she’s not a straight-waisted little girl either. You can’t escape the hourglass voluptuousness of this redesigned version. Yes, it’s a drawing, but I can make a drawing of the real Merida that looks like the real Merida and I know the artists that they have make these drawings could do the same; they've just been directed not to."

As with all of their princesses, Disney will establish an image for Merida which will become her iconic image and be used in its numerous product lines -- the question is, will it be one reflective of her true character from the film, the one embraced by the millions of children for whom she became an empowering role model, or will she forever be portrayed as this new sexualized Merida who lacks the special spark that made her such a unique and relatable character for children and especially young girls?

On behalf of the hundreds of thousands of people supporting the "Keep Merida Brave" campaign, we call on Disney to release an official statement that they will respect the vision of Merida’s creator to offer girls a "different kind of princess" and be responsive to the large outpouring of support for keeping Merida’s image true to her original character.

Over the past two days, in the face of growing consumer outrage at the redesign of Merida into a sexier, skinnier shadow of her former self, Disney has begun to assert that this redesigned version is a “one-time stylized version” as part of a “limited line of products.” This effort to placate the hundreds of thousands of Merida fans who have supported the petition and spoken out against the radical transformation of this beloved, empowering character is transparent and inadequate.

Merida’s creator, Brenda Chapman, in a statement adamantly opposing the redesign, stated that Merida was created to “give young girls a better, stronger role model, a more attainable role model, something of substance, not just a pretty fact that waits around for romance.” Disney’s willingness to redesign Merida in a manner directly opposing those intentions -- even in a limited product run -- shows that they are willing to sacrifice the integrity of this character and all she represents to young girls for profit.

Given this, those who have spoken out are well aware that regardless of whether this redesign is limited in nature, unless we have an official statement from Disney that they will respect the integrity of this character in the future, we cannot be assured that future and perhaps even more offensive renditions of Merida will not continue to appear or become established as her iconic image as part of the Disney Princess collection.

Accordingly, on behalf of the hundreds of thousands of people supporting the "Keep Merida Brave" campaign, we continue our call to Disney to release an official statement that they will respect the vision of Merida’s creator to offer girls a "different kind of princess" and be responsive to the large outpouring of support for keeping Merida’s image true to her original character.

Other Resources from A Mighty Girl:

This entry was posted in Misc, Front Page and tagged merida, petition, Disney on May 19, 2013 by Carolyn. ← Previous Post Next Post →