A Mighty Girl is thrilled to announce the launch of an exciting new special feature – Graphic Novels starring Mighty Girls! This new collection of nearly 60 graphic novels represents one of the largest ever compiled of graphic novels starring girls and women. While these selections will appeal to a wide range of children and youth, many of these novels will especially resonate with girls and young women who are often underrepresented in most graphic novels.

Clever Mice and Resilient Chicas: What Mighty Girls Can Learn from Graphic Novels 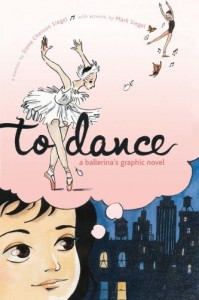 Often confused with their ancillary cousins, comic books, graphic novels are frequently dismissed as lacking educational content. Granted, as with every literary medium there are products of different caliber, A Mighty Girl was thrilled to discover a huge volume of graphic novels featuring true literary and artistic content that teach and entertain in equal measure.

In contrast to comic books which focus primarily on hero tales, graphic novels offer a huge variety of themes illustrating diverse walks of life, from the life a young girl living under communism in Marzi  to exploring the dreams of a future ballerina in the award-winning To Dance.

The graphic novel's ability to balance textual and pictorial narratives eclipses comic book standards not only in the realm of subject matter but in the depth of storytelling. The poignant Tale of One Bad Rat is a finely written story about a teenage girl attempting to come to grips with her experience of sexual abuse.  Author and illustrator Brian Talbot manages a difficult subject with admirable grace, exploring the heroine's journey with sensitivity while never once broaching violence or crudity that would render it inappropriate for a teen audience.

Librarians and educators have embraced graphic novels as useful teaching aids and it's easy to see why: in a media driven age, graphic artists recognize the impact of visual storytelling. Features such as detailed backdrops, complex facial expressions, and tonal body language allow illustrated tales to provide a layered reading experience that text alone may not be able to deliver.  Researchers have coined new terms to describe the flavor of inquiry the reader of graphic texts experiences: multimodal reading refers to the process of analyzing simultaneous text and illustrations. Concurrent analysis of coupled mediums--print and graphics--allows for learning on two different levels. This synchronous process of interpretation allows a reader to learn from differing modes in one instance, suggesting the more avenues available for learning, the better learned a topic becomes. 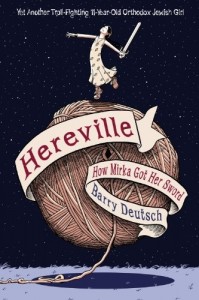 Research and anecdotal evidence also shows that graphic novels succeed in encouraging reluctant readers to engage with texts. Babymouse: Queen of the World is a great example of a graphic novel that is fun for all ages, with a story focused on the challenges of the school years and wonders of the imaginative mind, any reader would be hard pressed to resist Babymouse's spunk, humor, and resiliency. Further studies have shown that the visual-textual element of graphic novels supports  language acquisition skills for both English language learners and native speakers with learning disabilities.

In requiring a reader to critically analyze images, graphic novels enhance media literacy skills.  Navigating a media driven and gender biased world is a primary task of any Mighty Girl and media literacy skills are crucial. The plucky heroines of Girl Stories and Smile provide girls with relatable companions in this task, serving as examples of strong teens who persist in the face of social pressures and expectations.  The short-but-sweet Luz Sees the Light offers a pronounced critique of mass marketing as the innovative Luz rejects the pressures to consume evoked by billboard advertising in her city and instead focuses her energies on creating a community space in her neighborhood. Graphic novels provide substantial alternatives to mass media messaging and showcase diversity that  is underrepresented in the mainstream, such as the character of Luz, a Latina girl and her diverse crew of friends living in an urban area. The graphic medium is an especially potent avenue for these narratives, as they allow the reader to literally "see" things from a different perspective.

The best graphic novels come from writers and artists able to manipulate their medium in such a way that entices all readers, regardless of subject matter. The graphic element of these stories is often attractive enough to engage a reader in perusing topics that may not initially meet personal tastes but are nevertheless significant.  In the fantastic Hereville: How Mirka Got Her Sword, writer and illustrator Barry Deustch cleverly crafts negative space and panels in such a way that coaxes the reader along in the story, at times becoming so fluid the reader actually can't stop reading. 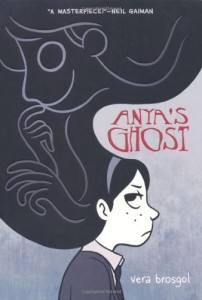 Hereville is also a prime example of the intricate subtlety that drives graphic novels.  The tale of a 11 year old Orthodox Jewish girl who longs to fight monsters, Mirka's religious faith is vividly represented yet rarely commented upon.  Deustch's reflections on Judaism come  in the form of color, when the book shifts from browns, blacks, and whites to a full palate during a religious celebration. Utilizing dreamy tones, Deutsch visually renders religious rites without miring them in historical explanation, allowing the reader a crisp snapshot of a culture that may be quite different from their own.

This tacit subtlety allows for a richness of character development that is difficult to achieve in traditional literature.  Take for example the protagonist of the thrilling Anya's Ghost. Anya is a teenage Russian immigrant trying to hide her heritage for the sake of fitting in. The reader learns this through several off-the-cuff remarks from minor characters, but mostly from the telling visual backgrounds in each panel--while her family kitchen is adorned with religious hangings, her own room boasts posters for angsty modern indie bands. This subtle method of texturing plots and characters allows graphic novels to tell biography, memoir, history, and fiction in innovative ways.

Perhaps the ultimate merit of graphic novels is their often astonishing beauty.  From the lushly reinvented Oz in Shanower and Young's interpretation of The Wonderful Wizard of Oz to the pastoral-yet-whimsical world portrayed in Hildafolk, graphic novels allow older readers to linger in the artistry they once  experienced reading picture books. The surreal moment in which Mirka finds herself in her deceased mother's arms in Hereville brought tears tumbling down my cheeks. The illustration captures a moment of wordless beauty, prodding the emotions in lieu of the intellect with panels devoid of text yet filled with poignant imagery.

Graphic novels can be seen as the evolution of the traditional novel for a new age, one which shies away from technology and retains the pleasures of the book, from the tactile delight of flipping through chapters to the ability to keep one's own pace in the plot.  Similar to traditional novels, graphic works allow readers a glimpse into a previously unknown world, but unlike conventional texts, they invite the reader to encounter that world pictorially, encouraging new ways of engaging with and learning from literature.