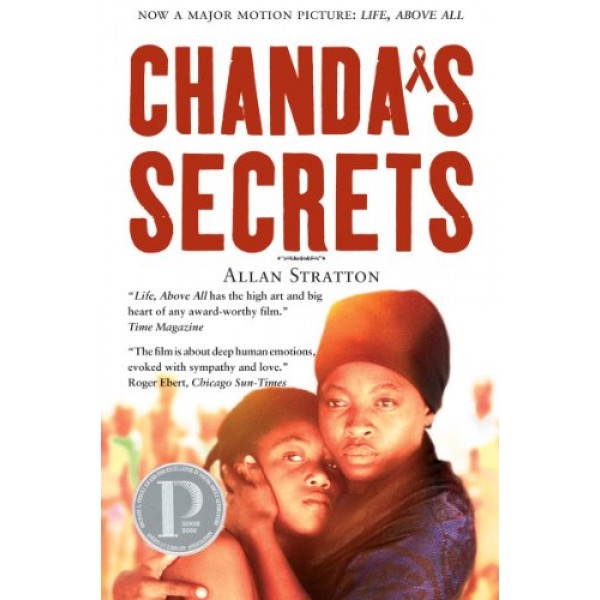 Chanda’s mother is not herself, her younger sister is acting out, and her best friend needs help. 16-year-old Chanda, an astonishingly perceptive girl living in the small city of Bonang in Africa, must confront the undercurrents of shame and stigma associated with HIV/AIDS. As time goes on, she rebels against the secrecy and lies that are keeping the epidemic strong. Through his artful style and dramatic storytelling, Allan Stratton captures the enduring strength of loyalty, the profound impact of loss, and a fearlessness that is powered by the heart. Above all, it is a story about living with truth.

Chanda's Secrets was first published in 2004 to extraordinary international acclaim. It won the Michael L. Printz Honor Book for Excellence in YA Literature, was an ALA Best Book for Young Adults selection and, in France, was a finalist for the Prix Sorcieres. It has now been made into a major motion picture, under the name Life, Above All. The film received a 10-minute standing ovation at the Cannes Film Festival and was honored with the prestigious Prix Francois Chalais.

"The message about overcoming ignorance and shame and confronting the facts is ever-present, but the tense story and the realistic characters . . . will keep kids reading and break the silence about the tragedy." -- Booklist

"Although Chanda lives in a world in which illness and death have become commonplace, it is not one in which AIDS can be mentioned.... Smart and determined, Chanda is a character whom readers come to care for and believe in, in spite of her almost impossible situation. The details of sub-Saharan African life are convincing and smoothly woven into this moving story of poverty and courage, but the real insight for readers will be the appalling treatment of the AIDS victims." -- School Library Journal