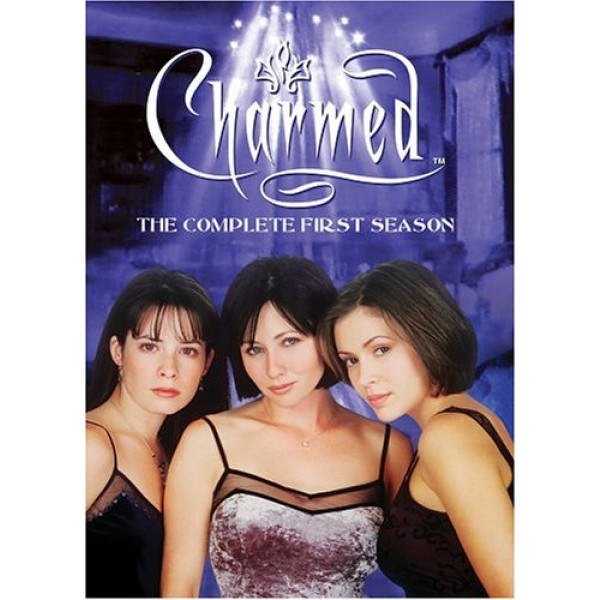 In Charmed, the three Halliwell sisters have accepted their destiny of protecting the innocent and vanquishing evil doers, even though that is generally not on the agenda of every twenty-something on the fast track to discovering what life's all about. Prue (Doherty), the oldest, is driven to succeed and dislikes the free-spirited antics of the youngest sister Phoebe (Milano). Piper (Combs), the earthy middle sister, mediates between her siblings. Prue has the power to move objects, Piper to freeze time and Phoebe to see the future. The sisters must band together to protect themselves, and the world, from the dark, demonic forces that seek to destroy them

Charmed: The Complete First Season recaptures a period when television's WB network was particularly keen on series about the supernatural and specially powered characters. The original home of Buffy the Vampire Slayer and future launch pad for Angel and Smallville, the WB debuted Charmed in 1998 with many of the same intriguing ironies that made those other shows click. Specifically, the greater a character's powers, the more vulnerable he or she becomes; the more superhuman, the more painfully obvious one's lonely, fragile humanity. The Halliwells, a trio of witch heroines and siblings at the center of Charmed, is a case in point. Phoebe (Alyssa Milano) returns to her San Francisco family home after losing her job, and moves in with her older sisters Prue (Shannen Doherty) and Piper (Holly Marie Combs). On her first night back, Phoebe finds the Book of Shadows in the attic and recites a spell giving all three women unique powers they were always meant to have: Prue suddenly has the gift of telekinesis, Piper can make time stand still, and Phoebe can see into the future. All well and good, but along with those extraordinary abilities is a new awareness of dark forces in the world from which mortals need protection. In some cases, those forces have been plotting a long time to steal the Halliwell's magical legacy once they awakened to it--and now they will never let up.

Evil warlocks, demons, ancient curses, Grimlocks, and Wendigos (the last two are best left explained by their respective episodes), however, are only half the battle on this sexy dramedy, in which more ordinary matters of emotional and real-world survival also preoccupy the Halliwells. An important ally, Inspector Andy Trudeau (Ted King), is Prue's ex-lover, a delicate detail that mixes pain with duty as the couple rekindles their troubled relationship while solving otherworldly crimes. In "Dead Man Dating," Piper falls for the ghost of a murdered man who needs help, and later competes with Phoebe for the attention of a handyman, Leo (Brian Krause). Jobs and money are always an issue, too. At one time or another, Phoebe works as a psychic, Piper as a caterer, and Prue finds a job at an auction house. As with Buffy, the engine of Charmed is the seamless, sometimes-comic, sometimes-tender way in which all these dynamics in the magic and non-magic worlds blend together, presenting young adult challenges that are both unique and somehow terribly familiar. It is particularly fun to watch this series grow, deepen, and experiment during its first year. The season's true highlight is probably "That 70s Episode," in which the Halliwells go back in time to meet their younger selves. --Tom Keogh