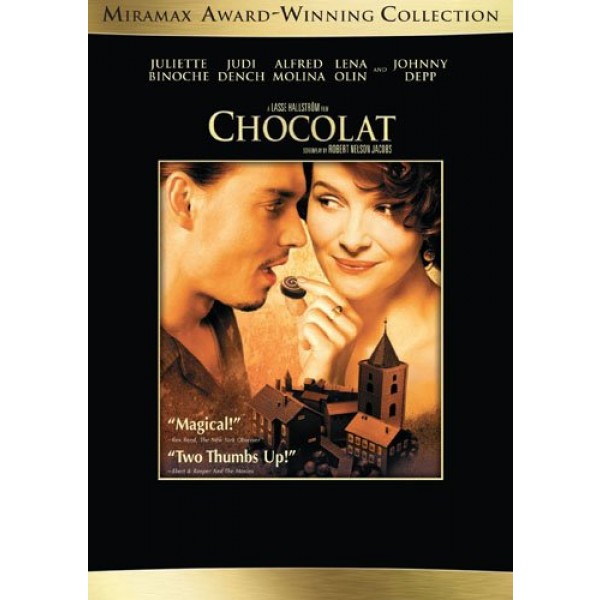 Chocolate is the beautiful and captivating comedy from the acclaimed director of the Cider House Rules! Nobody could have imagined the impact that the striking Vianne(Binoche) would make when she arrived in a tranquil, old-fashioned French town.

In her very unusual chocolate shop, Vianne begins to create mouth-watering confections that almost magically inspire the strailaced villagers to abandon themselves to temptation and happiness! But it is not until another stranger, the handsome Roux arrives in town that Vianne is finally able to recognize her own desires!

With movies like Chocolat, it's always best to relax your intellectual faculties and absorb the abundant sensual pleasures, be it the heart-stopping smile of chocolatier Juliette Binoche as she greets a new customer, an intoxicating cup of spiced hot cocoa, or the soothing guitar of an Irish gypsy played by Johnny Depp. Adapted by Robert Nelson Jacobs from Joanne Harris's popular novel and lovingly directed by Lasse HallstrÃ¶m, the film covers familiar territory and deals in broad metaphors that even a child could comprehend, so it's no surprise that some critics panned it with killjoy fervor. Their objections miss the point. Familiarity can be comforting and so can easy metaphors when placed in a fable that's as warmly inviting as this one.

Driven by fate, Vianne (Binoche) drifts into a tranquil French village with her daughter Anouk (Victoire Thivisol, from Ponette) in the winter of 1959. Her newly opened chocolatier is a source of attraction and fear, since Vianne's ability to revive the villagers' passions threatens to disrupt their repressive traditions.

The pious mayor (Alfred Molina) sees Vianne as the enemy, and his war against her peaks with the arrival of "river rats" led by Roux (Depp), whose attraction to Vianne is immediate and reciprocal. Splendid subplots involve a battered wife (Lena Olin), a village elder (Judi Dench), and her estranged daughter (Carrie-Anne Moss), and while the film's broader strokes may be regrettable (if not for Molina's rich performance, the mayor would be a caricature), its subtleties are often sublime. Chocolat reminds you of life's simple pleasures and invites you to enjoy them. -- Jeff Shannon