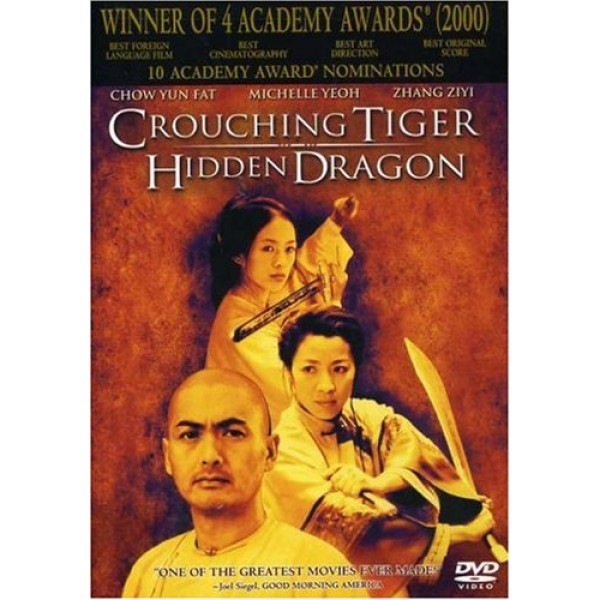 An epic set against the breathtaking landscapes of ancient China, Crouching Tiger, Hidden Dragon, combines the exhilarating martial arts choreography by Yuen Wo-Pind (The Matrix) with the sensitivity and classical storytelling of an Ang Lee film. The result is something truly unexpected: romantic, emotionally powerful entertainment.

Hong Kong wuxia films, or martial arts fantasies, traditionally squeeze poor acting, slapstick humor, and silly story lines between elaborate fight scenes in which characters can literally fly. Crouching Tiger, Hidden Dragon has no shortage of breathtaking battles, but it also has the dramatic soul of a Greek tragedy and the sweep of an epic romance. This is the work of director Ang Lee, who fell in love with movies while watching wuxia films as a youngster and made Crouching Tiger as a tribute to the form. To elevate the genre above its B-movie roots and broaden its appeal, Lee did two important things.

First, he assembled an all-star lineup of talent, joining the famous Asian actors Chow Yun-fat and Michelle Yeoh with the striking, charismatic newcomer Zhang Ziyi. Behind the scenes, Lee called upon cinematographer Peter Pau (The Killer, The Bride with White Hair) and legendary fight choreographer Yuen Wo-ping, best known outside Asia for his work on The Matrix. Second, in adapting the story from a Chinese pulp-fiction novel written by Wang Du Lu, Lee focused not on the pursuit of a legendary sword known as "The Green Destiny," but instead on the struggles of his female leads against social obligation. In his hands, the requisite fight scenes become another means of expressing the individual spirits of his characters and their conflicts with society and each other.

The filming required an immense effort from all involved. Chow and Yeoh had to learn to speak Mandarin, which Lee insisted on using instead of Cantonese to achieve a more classic, lyrical feel. The astonishing battles between Jen (Zhang) and Yu Shu Lien (Yeoh) on the rooftops and Jen and Li Mu Bai (Chow) atop the branches of bamboo trees required weeks of excruciating wire and harness work (which in turn required meticulous "digital wire removal"). But the result is a seamless blend of action, romance, and social commentary in a populist film that, like its young star Zhang, soars with balletic grace and dignity. -- Eugene Wei