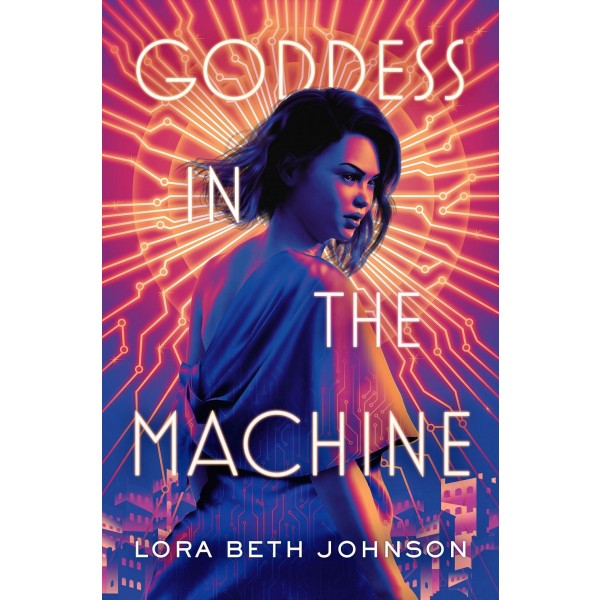 Goddess in the Machine

When Andra wakes up, she's drowning. Not only that, but she's in a hot, dirty cave, it's the year 3102, and everyone keeps calling her Goddess. When Andra went into a cryonic sleep for a trip across the galaxy, she expected to wake up in a hundred years, not a thousand. Worst of all, the rest of the colonists — including her family and friends — are dead, and for some reason, their descendants think Andra's a deity. She'll play along if it means she can figure out why she was left in stasis and how to get back to Earth.

Zhade, the exiled bastard prince of Eerensed, has other plans. Four years ago, the sleeping Goddess's glass coffin disappeared from the palace, and Zhade devoted himself to finding it. Now he's hoping the Goddess will be the key to taking his rightful place on the throne — if he can get her to play her part. Because if his people realize she doesn't actually have the power to save their dying planet, they'll kill her.

With a vicious monarch on the throne and a city tearing apart at the seams, Zhade and Andra might never be able to unlock the mystery of her fate, let alone find a way to unseat the king, especially since Zhade hasn't exactly been forthcoming with Andra. And a thousand years from home, is there any way of knowing that Earth is better than the planet she's woken to? This smart, thrilling sci-fi adventure is perfect for fans of Renegades and Aurora Rising.

"Along with differences between the world [Andra] knew and the one she awoke in, evolution of the English language into a futuristic dialect adds to her disorientation.... Once readers (and Andra) get their bearings in Zhade’s storyline and Andra’s role, a series of twists and curveballs amps up stakes and tension, carrying the plot to its sequel-promising conclusion." — Kirkus Reviews