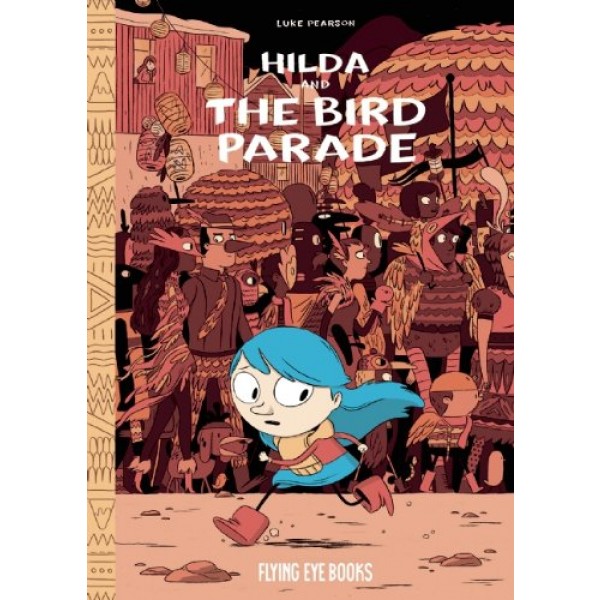 Hilda and the Bird Parade

Hilda and her mother have finally laid roots down in their new home in Trolberg. Pining for her magical friends and wonder filled homeland, Hilda is finding it hard to fit in to this crowded new place. But today is somehow different, today Hilda sees a glimmer of the magic she left behind in the fjords; tonight is the night of the mysterious Bird Parade.

Finding herself lost on the streets of Trolberg, Hilda befriends a talking raven. Together they encounter all manner of bizarre creatures from outcast Trolls to ferocious Salt Lions and deadly Rat Kings — maybe the city isn't so boring after all. As the pair try to find their way home, it becomes clear that the amnesiac raven has an important mission to attend to.... if only he could remember what it was.

Hilda's story began in Hildafolk and continued in Hilda and the Midnight Giant.

"Hilda has a huge heart, a huge sense of curiosity, and an admirable sense of courage. Her encounters with a Salt Lion and an obscurely glimpsed Rat King lack overly frightening menace and are done with artful panache, making this a fantastic choice both for kids and for adults looking for a bit less punching and a bit more quiet wonder in their comic books. Environment being so crucial to the tale, Pearson’s expressive architecture and city design are nothing short of remarkable, giving a personality to neighborhoods and even individuals doorways. His large-headed, stick-legged cartooning employs both humor and empathy and gracefully reflects the book’s tone, a perfect pitch between childlike adventure, subtle mystery, and gentle lyricism." — Jesse Karp, Booklist