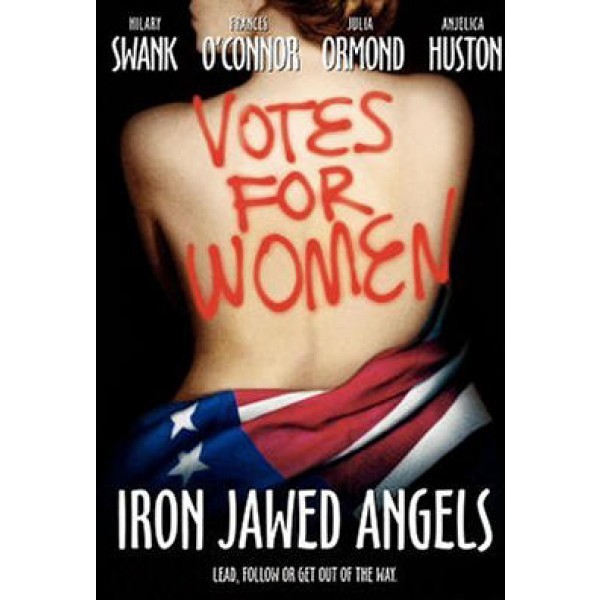 Oscar-winner Hilary Swank stars in a fresh and contemporary look at a pivotal event in American history, telling the true story of how Alice Paul and Lucy Burns, a pair of defiant and brilliant young activists, took the women's suffrage movement by storm in the 1910s, putting their lives at risk to help American women win the right to vote.

Alice Paul's remarkable story is also told in the excellent One Woman, One Vote documentary which also tells the story of the Suffrage Movement's other key leaders such as Susan B. Anthony and Elizabeth Cady Stanton.

The fight for women's voting rights has rarely been given as dramatic a treatment as in Iron Jawed Angels. Hilary Swank (Boys Don't Cry) and Frances O'Connor (Mansfield Park) star as second-wave suffragettes Alice Paul and Lucy Burns, who led the final fight for the 19th Amendment to the Constitution.

Though the movie sometimes tries too hard to avoid the stigma of a period piece (the soundtrack features electric guitars, Swank has a steamy moment in a bathtub, and the editing is jagged and flashy), the mounting energy of the fight--and the increasingly nasty opposition--gains real momentum when a wartime picket line leads to Paul, Burns, and their sisters-in-arms being arrested on trumped-up charges and imprisoned. The actors--including Julia Ormond (Smilla's Sense of Snow), Angelica Huston (Prizzi's Honor, The Grifters), and Brooke Smith (Vanya on 42nd Street)--give fervent, determined performances. -- Bret Fetzer