Together We Can Keep Merida Brave! 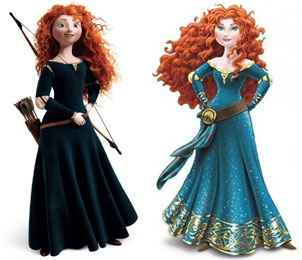 Hundreds of thousands of people have spoken out and called on Disney to keep Merida brave! Merida is the strong, confident, self-rescuing princess that countless girls and their parents were waiting for; a princess who looked like a real girl, complete with the ‘imperfections’ that made her such a unique and relatable character for children.

When we learned of Disney’s redesign of Merida for Disney Princess collection merchandise, we asked our Facebook community for their opinion and received over 800, overwhelmingly negative, comments within hours. To help amplify these voices and send a message to Disney that Merida’s makeover does a tremendous disservice to the millions of children for whom Merida is an empowering role model, we created our Say No to the Merida Makeover and Keep Our Hero Brave petition.

Our petition quickly attracted over 200,000 signers as many people learned of Merida’s redesign and joined their voices to the growing chorus calling for a commitment from Disney to keep Merida true to her original character. As Merida’s creator, Oscar-winning Brave writer and director Brenda Chapman stated, Merida was created to "give young girls a better, stronger role model, a more attainable role model, something of substance, not just a pretty fact that waits around for romance."

Although Disney now claims that the new sexy Merida design was only intended to be part of a "limited line of products," the madeover Merida appears extensively on the Disney Consumer Products website. Unless we have an official statement from Disney that they will respect the integrity of this character in the future, we cannot be assured that future and perhaps even more offensive renditions of Merida will not continue to appear or become established as her iconic image as part of the Disney Princess collection.

Given the tremendous growth of the petition and huge press attention this issue has attracted, Disney is clearly listening. Now is the time to keep up the pressure and tell Disney that we will not rest until we receive an official statement from them promising to keep Merida brave in all future merchandise releases and marketing. If you’ve already signed the petition and would like to learn what other actions you can take to make sure that Disney hears our call to Keep Merida Brave loud and clear, please visit our Take Action page.

On this "Keep Merida Brave" campaign page, we have also collected numerous other resources that will likely be of interest to those supportive of this cause. Thank you for your support! In the film, Merida wanted to change her fate; together, we can change hers.

Send a message to Disney that the Merida Makeover is unacceptable.

A Mighty Girl’s blogs on the "Keep Merida Brave" campaign, including our statement responding to Disney

For those seeking stories for their children of empowered princesses like Merida, A Mighty Girl has compiled a huge collection in our "Ultimate Guide to the Independent Princess"

Resources for journalists and bloggers seeking information about A Mighty Girl