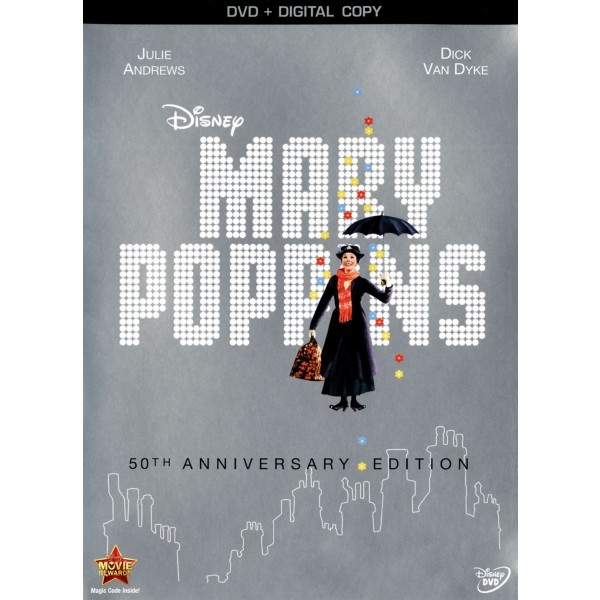 Experience the extraordinary animation, dazzling special effects, and award-winning music of Walt Disney's Mary Poppins in this fully restored and remastered 2-Disc 40th Anniversary Edition! Join the "practically perfect" Mary Poppins (Julie Andrews) for a "Jolly Holiday" as she magically turns every chore into a game and every day into a whimsical adventure. Along the way you'll be enchanted by unforgettable characters such as the multitalented chimney sweep Bert (Dick Van Dyke). Unpack Mary's magical carpetbag full of bonus features, including an all-new animated short, games, and a never-before-heard deleted song.

You won't need "A Spoonful Of Sugar" to love every moment of this timeless Disney classic!

There is only one word that comes close to accurately describing the enchanting Mary Poppins, and that term was coined by the movie itself: supercalifragilisticexpialidocious! Even at 2 hours and 20 minutes, Disney's pioneering mixture of live action and animation (based on the books by P.L. Travers) still holds kids spellbound. Julie Andrews won an Oscar as the world's most magically idealized nanny ("practically perfect in every way," and complete with lighter-than-air umbrella), and Dick Van Dyke is her clownishly charming beau, Bert the chimney sweep. The songs are also terrific, ranging from bright and cheery ("A Spoonful of Sugar") to dark and cheery (the Oscar-winning "Chim Chim Cher-ee") to touchingly melancholy ("Feed the Birds").

Many consider Mary Poppins to be the crowning achievement of Walt Disney's career--and it was the only one of his features to be nominated for a best picture Academy Award until Beauty and the Beast in 1991. -- Jim Emerson