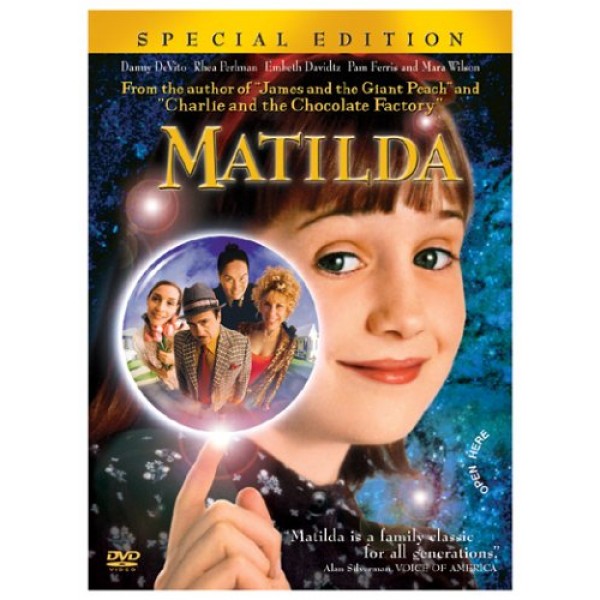 See the world from a kid's-eye view with Matilda, a modern fairytale that mixes hilarious humor with the magical message of love. Mrs. Doubtfire's Mara Wilson stars as Matilda, a super-smart little girl who's woefully misunderstood by her parents (Danny DeVito and Rhea Perlman), her brother, and an evil school principal. But with the help of a brave best friend and a wonderful teacher, Matilda discovers she doesn't have to get mad to get even.

This film is based on the fantastic book Matilda by Roald Dahl.

Danny DeVito's adaptation of the Roald Dahl book for children is mostly just fine, helped along quite a bit by the charming performance of Mara Wilson (Mrs. Doubtfire) as young Matilda, a brilliant girl neglected by her stupid, self-involved parents (DeVito and Rhea Perlman). Ignored at home, Matilda escapes into a world of reading, exercising her mind so much she develops telekinetic powers. Good thing, too: sent off to a school headed by a cruel principal, Matilda needs all the help she can get.

DeVito takes a highly stylized approach that is sometimes reminiscent of Barry Sonnenfeld (director of Get Shorty, a DeVito production), and his judgment is not the best in some matters, such as letting the comic-scary sequences involving the principal go on too long. But much of the film is delightful and funny. -- Tom Keogh