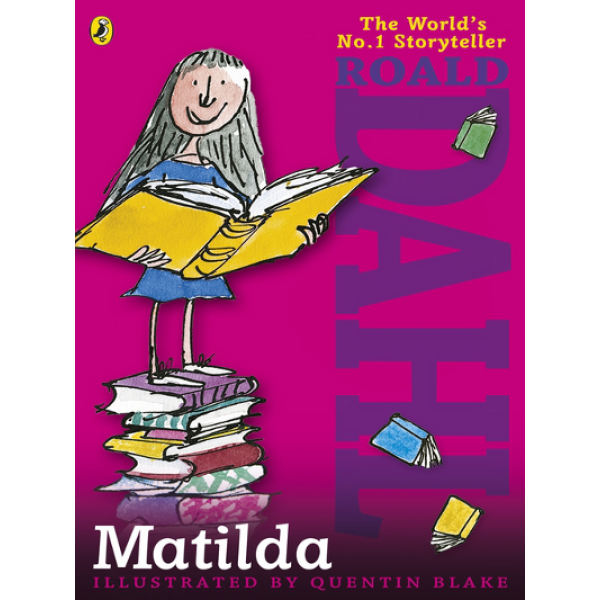 For most kids, The Trunchbull is pure terror, but for Matilda, she's a sitting duck.

Who put superglue in Dad's hat? Was it really a ghost that made Mom tear out of the house? Matilda is a genius with idiot parents--and she's having a great time driving them crazy. But at school things are different. At school there's Miss Trunchbull, two hundred menacing pounds of kid-hating headmistress. Get rid of The Trunchbull and Matilda would be a hero. But that would take a superhuman genius, wouldn't it?

This story was featured in A Mighty Girl's collection of the Top Read Aloud Books Starring Mighty Girls.

"Dahl's phenomenal popularity among children speaks for his breathless storytelling charms; his fans won't be disappointed by Matilda." -- Publisher's Weekly

Matilda is a little girl who is far too good to be true. At age five-and-a-half she's knocking off double-digit multiplication problems and blitz-reading Dickens. Even more remarkably, her classmates love her even though she's a super-nerd and the teacher's pet. But everything is not perfect in Matilda's world. For starters she has two of the most idiotic, self-centered parents who ever lived. Then there's the large, busty nightmare of a school principal, Mrs. ("The") Trunchbull, a former hammer-throwing champion who flings children at will and is approximately as sympathetic as a bulldozer. Fortunately for Matilda, she has the inner resources to deal with such annoyances: astonishing intelligence, saintly patience, and an innate predilection for revenge.

She warms up with some practical jokes aimed at her hapless parents, but the true test comes when she rallies in defense of her teacher, the sweet Miss Honey, against the diabolical Trunchbull. There is never any doubt that Matilda will carry the day. Even so, this wonderful story is far from predictable--the big surprise comes when Matilda discovers a new, mysterious facet of her mental dexterity. Roald Dahl, while keeping the plot moving imaginatively, also has an unerring ear for emotional truth. The reader cares about Matilda because in addition to all her other gifts, she has real feelings.