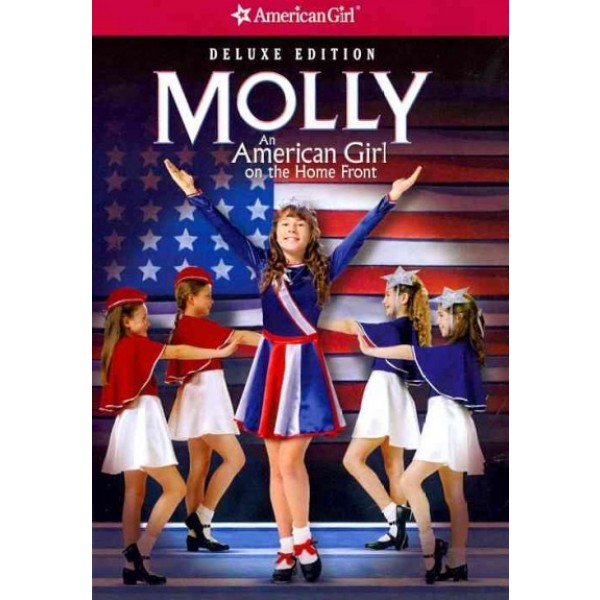 Molly: An American Girl on the Home Front

The doll you love comes home on DVD in a full-length, live-action movie. Molly: An American Girl On The Homefront has all the joy, excitement and you-are-there history of the best-selling books about Molly McIntire. Molly McIntire is a girl growing up in 1944. The world is at war, and she misses her father who is overseas caring for wounded soldiers.

Molly doesn't like many of the changes the war has brought, like rationing rubber, eating turnips for dinner, and not seeing her Dad on Christmas. But she learns the importance of getting along and pulling together, just as her country must do to win the war! Lively and lovable, she is the star of her story. Cast includes Molly Ringwald (Pretty in Pink, Breakfast Club, Sixteen Candles)

Molly, a spunky heroine in the wildly popular American Girl series of books and characters, is a typical tween living in an atypical time: 1943, the height of World War II. In An American Girl on the Home Front, Molly and her friends are dimly aware of the war and the occasional hardship it can mean, but Molly (played with grace and bravado by Maya Ritter), like most kids, really hasn't had occasion to pay attention ("She just doesn't understand rations, Mom," her sister snipes).

This film follows Molly as the war begins to hit home; her father is shipped overseas and her mom (a delightful Molly Ringwald) becomes a temporary Rosie the Riveter. Molly bravely rolls with the punches, yet her life is still leavened with fun, like learning to tap dance for the local Miss Victory competition. Then a young refugee from England, Emily (Tory Green), comes to stay, and Molly's, and young viewers', consciousness is raised.

As always with American Girl heroines, Molly is a great role model with strong values, but never a goody-two-shoes. The period touches, including clothes, movie-reels, and background music, are well done too. Extras include a compelling documentary, Uncle Sam Wants You... to Tap Dance, featuring an interview with Mitzy Scott, an 88-year-old former USO dancer and hostess, relaying her personal history of dancing at home and with soldiers on leave, making something personal and dear to her--dance--into the ultimate patriotic act. -- A.T. Hurley