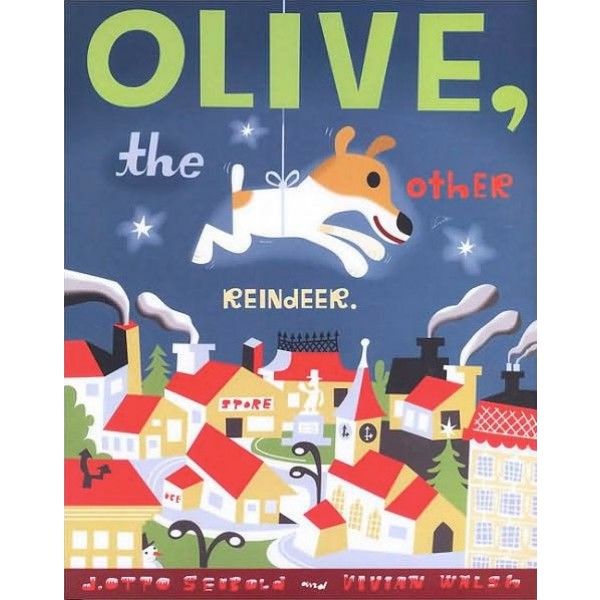 Olive, the Other Reindeer

This beautiful deluxe edition marks the tenth anniversary of J. Otto Seibold and Vivian Walsh's modern Christmas classic the story of a little dog named Olive with big reindeer dreams! When the book was first published in 1997, it enjoyed great reviews and has since sold more than 1 million copies. This new edition is a larger version of the original book, and it features flaps to lift, spots to scratch and sniff, and a pop-up grand finale. Designed to be a perfect holiday gift, this edition will appeal to Olive's many fans and is sure to make new ones.

"Seibold's gregarious cartoons create an avocado-and-tomato colored cartoon Christmas in which little details shine: In a scene of flutes falling out of the sky and into a snow bank, a cutaway shows a surprised bunny awaking to find its burrow pierced by a silver shaft." -- Kirkus Reviews

You won't understand the premise of this book if you've never sung "Rudolph the Red-Nosed Reindeer," so let's start there. The carol begins, "Rudolph the red-nosed reindeer / had a very shiny nose / and if you ever saw it, / You would even say it glows / All of the other reindeer / used to laugh and call him names / They never let poor Rudolph / join in any reindeer games." If you notice that "all of the other reindeer" sounds suspiciously like "Olive, the other reindeer," you've discovered the source of Olive's adventures! Olive is a dog. But when she hears this holiday tune, a bit of an identity crisis sets in. She decides she must be a reindeer and heads to the North Pole to see if she can join Santa's reindeer team.

Olive gets to the North Pole just in time. Comet (the biggest reindeer) uses a piece of extra ribbon to tie Olive to the reindeers' elaborate harness system. As the sleigh rose high in the sky, "Olive was surprised it was so easy to fly." (The sight of a dog dangling beneath Santa's sleigh will reduce readers to charmed giggles.) Despite Olive's lack of flying ability and the unfortunate mishap caused by the reindeers' distraction, she, in her inherent dogginess, proves to be useful as both a flute retriever and a cookie smeller.