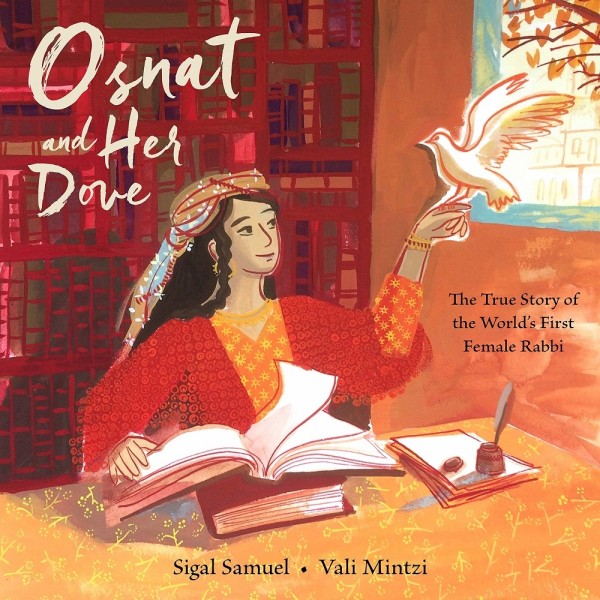 Osnat and Her Dove: The True Story of the World's First Female Rabbi

Osnat was born five hundred years ago — at a time when almost everyone believed in miracles. But very few believed that girls should learn to read. Yet Osnat's father was a great scholar whose house was filled with books. And she convinced him to teach her. Then she in turn grew up to teach others, becoming a wise scholar in her own right, the world's first female rabbi!

Some say Osnat performed miracles — like healing a dove who had been shot by a hunter! Or saving a congregation from fire! But perhaps her greatest feat was to be a light of inspiration for other girls and boys; to show that any person who can learn might find a path that none have walked before. This inspiring picture book, with lush illustrations of Osnat and her surroundings, is an intriguing portrait of an early female Jewish hero.

"Samuel tells about Osnat’s extraordinary life and seamlessly weaves in some of the many legends and miracles that were part of her life story.... Mintzi’s layered gouache paintings beautifully convey this long-ago time with street scenes, yeshiva interiors, and starlit roads. In one evocative double-page spread, Hebrew letters dance across the pages, many taking the shape of stylized animals in Osnat’s imagination. Fact and legend become one in an inspiring story of an exceptional woman." — Kirkus Reviews