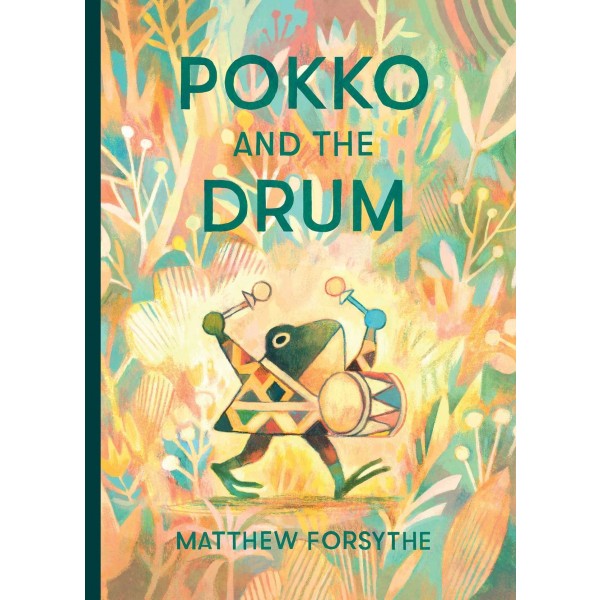 The biggest mistake Pokko's parents ever made was giving her the drum. When Pokko takes the drum deep into the forest it is so quiet, so very quiet that Pokko decides to play. And before she knows it she is joined by a band of animals — first the raccoon, then the rabbit, then the wolf — and soon the entire forest is following her. Will Pokko hear her father's voice when he calls her home?

From E.B. White Read Aloud honor artist Matthew Forsythe comes a picture book about a magical drum, an emerald forest, and the little frog who dares to make her own music. It's a celebration of art and persistence that will speak to both children and parents.

"[Pokko's father] prevails upon her to head outside — 'We’re just a little frog family that lives in a mushroom, and we don’t like drawing attention to ourselves' — and she does, venturing into the surrounding woods alone. After Pokko resists the forest’s silence, 'tapping on her drum,' a banjo-playing raccoon falls in behind her; as Pokko plays louder, a rabbit with a trumpet appears. An eager wolf joins, too, with less-than-musical results ('No more eating band members or you’re out of the band,' Pokko orders).... Forsythe’s tapestrylike spreads give the tense, funny sequences a lush elegance marked by amusing visual asides, painterly interiors, and a triumphant parade. In embracing one’s own beat, Pokko discovers, extraordinary things can happen — surprising things, upsetting things, and glorious things, too." — Publishers Weekly