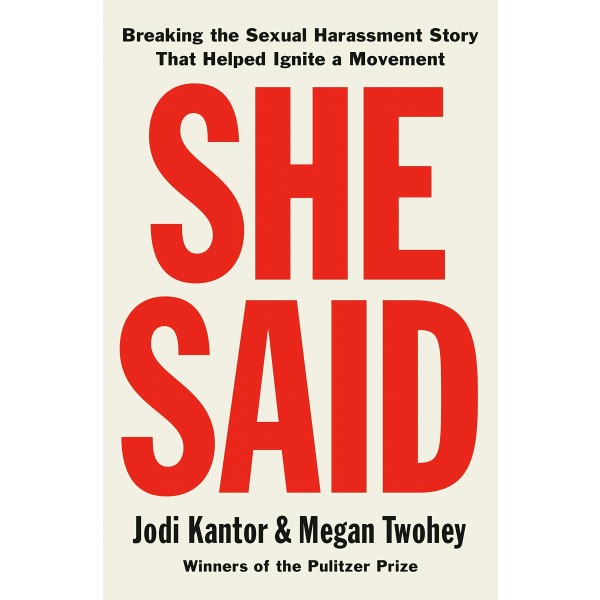 She Said: Breaking the Sexual Harassment Story That Helped Ignite a Movement

For many years, reporters had tried to get to the truth about Harvey Weinstein's treatment of women, but in 2017, when Jodi Kantor and Megan Twohey began their investigation into the prominent Hollywood producer for the New York Times, his name was still synonymous with power. They unearthed disturbing and long-buried allegations were unearthed, but Weinstein had evaded scrutiny in the past, and he was not going down without a fight.

Still, nothing could have prepared Kantor and Twohey for what followed the publication of their initial Weinstein story on October 5, 2017. Over the next twelve months, hundreds of men from every walk of life and industry were outed following allegations of wrongdoing. But did too much change — or not enough?

In the tradition of great investigative journalism, She Said tells a thrilling story about the power of truth, with shocking new information from hidden sources. Kantor and Twohey, who won the Pulitzer Prize for their investigation, describe not only the consequences of their reporting for the #MeToo movement, but the inspiring and affecting journeys of the women who spoke up — for the sake of other women, for future generations, and for themselves.

"From the Pulitzer Prize-winning reporters who broke the news of Harvey Weinstein's sexual harassment and abuse for the New York Times, Jodi Kantor and Megan Twohey, the thrilling untold story of their investigation and its consequences for the #MeToo movement.... [Ongoing] questions [about the impact of #MeToo] hung in the air months later as Brett Kavanaugh was nominated to the Supreme Court, and Christine Blasey Ford came forward to testify that he had assaulted her decades earlier. Kantor and Twohey, who had unique access to Ford and her team, bring to light the odyssey that led her to come forward, the overwhelming forces that came to bear on her, and what happened after she shared her allegation with the world." — from the back cover