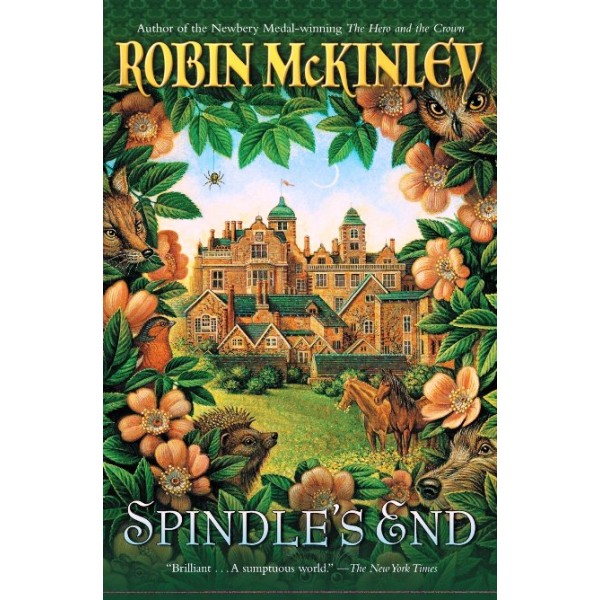 The evil fairy Pernicia has set a curse on Princess Briar-Rose: she is fated to prick her finger on the spindle of a spinning wheel and fall into an endless, poisoned sleep. Katriona, a young fairy, kidnaps the princess in order to save her; she and her aunt raise the child in their small village, where no one knows her true identity. But Pernicia is looking for her, intent on revenge for a defeat four hundred years old. Robin McKinley's masterful version of Sleeping Beauty is, like all of her work, a remarkable literary feat.

""Dense with magical detail and all-too-human feeling, this luscious, lengthy novel is almost impossible to rush through." -- Publishers Weekly

Renowned fantasy writer Robin McKinley, author of the lush "Beauty and the Beast" retellings Beauty and Rose Daughter, has produced another re-mastered fairy tale, this time about the dreamy Sleeping Beauty. Much like in the original story, the infant princess, here named Rosie, is cursed by an evil fairy to die on her 21st birthday by pricking her finger on a spindle. That same day, Rosie is whisked away into hiding by a peasant fairy who raises her and conceals her royal identity. From that point on, McKinley's plot and characterization become wildly inventive. She imagines Rosie growing up into a strapping young woman who despises her golden hair, prefers leather breeches to ball gowns, and can communicate with animals. And on that fateful birthday, with no help from a prince, Rosie saves herself and her entire sleeping village from destruction, although she pays a realistic price. In a final master stroke, McKinley cleverly takes creative license when the spell-breaking kiss (made famous in "Sleeping Beauty") comes from a surprising source and is bestowed upon the character least expected.

Although the entire novel is well written, McKinley's characterization of Rosie's animal friends is exceptionally fine. Observations such as "...foxes generally wanted to talk about butterflies and grasses and weather for a long time while they sized you up," will spark reader's imaginations. It won't be hard to persuade readers of any age to become lost in this marvelous tale; the difficult part will be convincing them to come back from McKinley's country, where "the magic... was so thick and tenacious that it settled over the land like chalk dust...." Highly recommended. --Jennifer Hubert