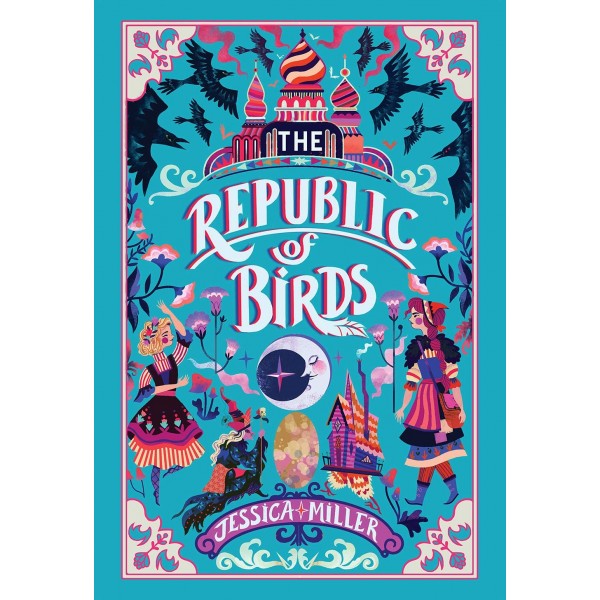 The Republic of Birds

In the land of Tsaretsvo, civil war has divided the human kingdom from the Republic of Birds. Magic is outlawed, and young witches are sent to a mysterious boarding school, from which no one has returned. Olga and her family live a life of dull privilege in the capital until her father displeases the tyrannical tsarina. The family is sent off into exile at the Imperial Center for Avian Observation, an isolated shack near the Republic of Birds.

Unlike the rest of her family, Olga doesn’t particularly mind their strange new life. She never fit into aristocratic society as well as her perfect younger sister, Mira. What does worry Olga is her blossoming magical abilities. If anyone found out, they’d send her away. But then Mira is kidnapped by the birds, and Olga has no choice but to enter the forbidden Republic, a dangerous world full of yagas, talking birds, and living dreams. To navigate the Republic and save her sister, she’ll need her wits, her cunning — and even her magic. This rich middle grade fantasy, inspired by Russian folklore, follows a young witch as she finds a place for herself in a world that fears her talents.

"Complex plot strands weave around a firebird egg, which is the linchpin in the ongoing tensions between the human empire and the bird Republic beyond the mountains, the recent banishment of yagas (traditional Slavic witches with mobile, bird-legged huts), the Bleak Steppe Finishing School for Girls of Unusual Ability, and Olga’s own magic involving her ability to bring maps to life.... This unusual and intriguing setting includes a subtle message about state-sponsored propaganda and the manipulation present in fears of the Other." — Kirkus Reviews