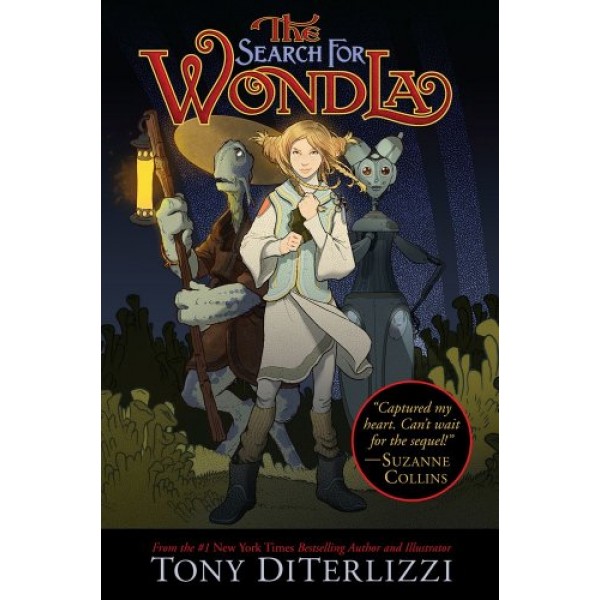 The Search for WondLa

When the underground sanctuary that Eva Nine was raised in by the robot Muthr is destroyed by an invading alien, the twelve-year-year-old girl is forced to flee above ground. Eva Nine is searching for anyone else like her: She knows that other humans exist because of an item she treasures -- a scrap of cardboard on which is depicted a young girl, an adult, and a robot, with the strange word, "WondLa."

Breathtaking two-color illustrations throughout display another dimension of the tale, and readers with webcams can also view Augmented Reality that reveals additional information about Eva Nine's world. Tony DiTerlizzi honors traditional children's literature in this totally original space-age adventure -- one that is as complex as an alien planet, but as simple as a child's wish for a place to belong.

The first book in a trilogy, Eva's adventures continue in the sequels, A Hero for WondLa and The Battle for WondLa.

Amazon Best of the Month, September 2010: Tony DiTerlizzi's fantastically imaginative new middle grade novel, The Search for WondLa, combines old-fashioned storytelling with a highly original twist. Eva Nine is a curious and sensitive 12-year old, who has existed only in a subterranean home called Sanctuary, cared for by a robot named Muthr. Eva's great desire is to go aboveground, and her wish comes true, though not as she had imagined. On the surface, Eva goes in search of other humans -- she has never met one -- and soon meets both friend and foe. DiTerlizzi's gorgeous black and white illustrations enhance the cinematic quality of his writing, and the book includes augmented reality maps where readers can follow Eva and her friends's travels in 3D. A surprising conclusion to this action-packed story of friendship and belonging will leave readers clamoring for more. --Seira Wilson