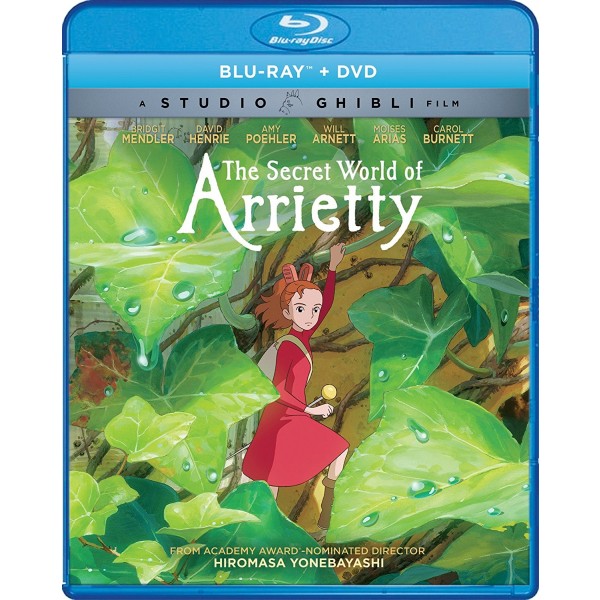 The Secret World of Arrietty

Discover The Secret World Of Arrietty where your imagination comes to life! The studio that brought you Ponyo and the Academy Award-winning Spirited Away (2002, best animated feature) once again delivers a heartwarming tale of friendship and courage.

In a secret world hidden beneath the floorboards, little people called Borrowers live quietly among us. But when tenacious and tiny Arrietty is discovered by Shawn, a human boy, their secret and forbidden friendship blossoms into an extraordinary adventure.Featuring the voices of the Disney Channel's Bridgit Mendler, David Henrie, and comedic all-stars Will Arnett, Amy Poehler, and Carol Burnett, and based on the award-winning novel The Borrowers.

The Secret World of Arrietty is a remake of the magical fairy tale The Borrowers, as seen through the keen, imaginative eye of Japanese writer Hayao Miyazaki. The American version of this delicately, richly animated film is that rarest of children's movies--one that is a deeply engaging experience for adults as well. The visuals and graphics are gasp-inducing, yet never over the top or too showy. And the actors dubbing Arrietty in English, including standouts Amy Poehler, Will Arnett, and Carol Burnett, are expressive and emotive. The Secret World of Arrietty tells the tale of a small family of "borrowers," tiny people who live underneath the homes of the "beans" (human beings). The borrowers must stealthily gather small bits of items they need--a sugar cube, a sheet of tissue, biscuits--from the upstairs without being discovered by the beans.

Arrietty is a plucky teenager (voice by Bridgit Mendler) whose parents (Poehler and Arnett) think she's ready for her first "borrowing" excursion. But meanwhile, a young "bean" named Shawn has moved into the house above them, to rest and prepare for a heart operation, and to be cared for by the flighty Hara (Burnett). Shawn thinks he might have seenâ€¦ somethingâ€¦ moving in the meadow where he rests and reads. It's not giving away too much to say that Arrietty and Shawn brush against each other's lives--and neither's is the same afterward. For any fans of Miyazaki's other films, and anyone of any age seeking immersive family-friendly entertainment that's life-affirming, The Secret World of Arrietty is a winning experience. --A.T. Hurley