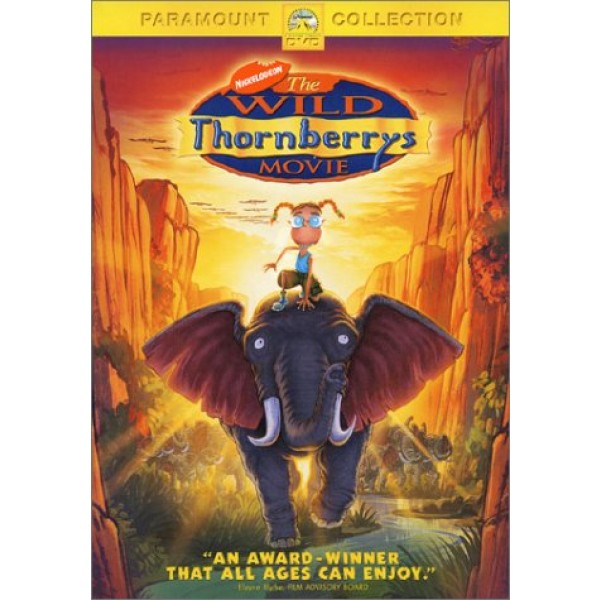 The Nickelodeon cartoon series The Wild Thornberrys gets its first feature-length animated film, directed by show creator Cathy Malkasian with a screenplay by Kate Boutilier (writer of Nickelodeon's Rugrats in Paris). The main character is 12-year-old Eliza Thornberry (voice of Lacey Chabert), a braces-and-glasses-wearing eccentric girl in an adventurous family of travelers.

Due to an interaction with a shaman, she has been granted the special power of communication with animals, as long as she promises not to tell anyone about it. Her powers are challenged when her parents, Nigel (voice of Tim Curry) and Marianne (voice of Jodi Carlisle), decide to take the family on an African safari to make a nature documentary. Also along for the trip is snobby sister Debbie (voice of Danielle Harris), feral youngster Donnie (voice of Flea from the Red Hot Chili Peppers), and pet chimpanzee Darwin (voice of Tom Kane). After her new Cheetah cub friend is stolen by poachers, Eliza is determined to get involved. However, the stuffy Thornberry grandparents get in the way by sending her to boarding school. It's up to Eliza and Darwin to defeat the poachers and save the cub. Also featuring the voice talents of Brenda Blethyn and Lynn Redgrave.

This charming movie version of the Nickelodeon cartoon centers on Eliza, youngest daughter of the Thornberry family, whose parents Nigel and Marianne travel the world to create a nature program for television. But Eliza, thanks to a mystical encounter, has the power to talk to animals--a power that leads her on the hunt for poachers in Africa who have captured a baby cheetah. Eliza's best friend, a chimpanzee named Darwin, is along for the ride, while her resentful teenage sister Debbie is trying to bring her back to their parents.

The characters in The Wild Thornberrys Movie are well-defined and delightful, the well-written script zips along, and the animation is visually dynamic; all in all, an excellent animated feature. Featuring the voices of Tim Curry, Lacey Chabert, Rupert Everett, Marisa Tomei, Alfre Woodard, and Lynn Redgrave. -- Bret Fetzer