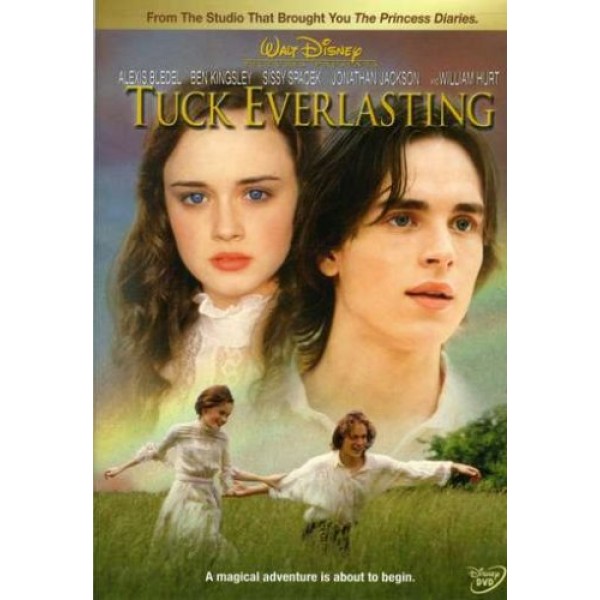 Walt Disney Pictures' Tuck Everlasting, based on the book by Natalie Babbitt, is a timeless and enchanting adventure about one girl's magical summer that will captivate audiences of any age. Young Winnie Foster, stifled by the formality of her proper life and domineering mother, escapes into the woods only to get lost. Soon she happens upon Jesse Tuck -- a boy full of life and adventure who's unlike anyone she's ever met -- and falls in love. The Tucks, a kind and generous family, have a powerful secret -- a spring that holds the magic of everlasting life. And now Winnie must choose to live life as she knows it or drink from the spring.

It's a life-affirming adventure that will cast its irresistible spell over you again and again.

With the makings of a classic, Disney's Tuck Everlasting compares favorably with such family favorites as The Secret Garden and Fairy Tale: A True Story. Loosely but respectfully adapted from Natalie Babbitt's beloved children's book, this appealing fable focuses on the timeless Tuck family, blessed--and cursed--with immortality after drinking from a magical spring. Hiding their secret over passing decades, they are discovered in 1914 by Winnie (Alexis Bledel)--the only daughter of stern, upper-crust socialites--who encounters the life-affirming Jesse Tuck (Jonathan Jackson) and grows enchanted with his family (Sissy Spacek, William Hurt, Scott Bairstow) while her parents fear she's been kidnapped.

The film's teenage romance is invented (Winnie is younger in Babbitt's book), but it's charmingly appropriate, and Ben Kingsley is perfect as a menacing man of mystery. Scoring a solid follow-up to his equally enjoyable My Dog Skip, director Jay Russell turns Tuck Everlasting into a magical plea for living life to its fullest. -- Jeff Shannon