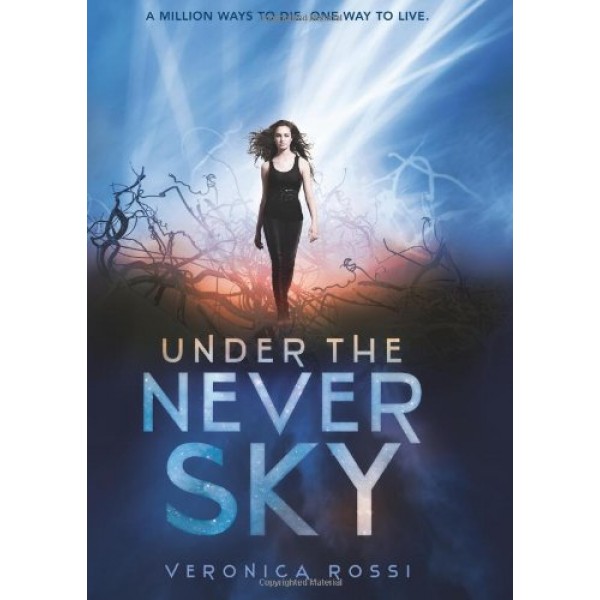 Under the Never Sky

Exiled from her home, the enclosed city of Reverie, Aria knows her chances of surviving in the outer wasteland -- known as The Death Shop -- are slim. If the cannibals don't get her, the violent, electrified energy storms will. She's been taught that the very air she breathes can kill her. Then Aria meets an Outsider named Perry. He's wild -- a savage -- and her only hope of staying alive.

A hunter for his tribe in a merciless landscape, Perry views Aria as sheltered and fragile -- everything he would expect from a Dweller. But he needs Aria's help too; she alone holds the key to his redemption. Opposites in nearly every way, Aria and Perry must accept each other to survive. Their unlikely alliance forges a bond that will determine the fate of all who live under the never sky.

In her enthralling debut, Veronica Rossi sends readers on an unforgettable adventure set in a world brimming with harshness and beauty.

“Aria is a memorable protagonist as she battles her own shortcomings with the same ferocity as she fights for the lives of those she loves. The world itself -- sharply divided into garishly surreal Realms, cozy Pods, and harsh, unforgiving outside -- is as creatively and lavishly developed as the characters themselves.” -- Horn Book

“Rossi nails the feat of offering dual perspectives. Rossi grounds her worldbuilding in language, creating idioms for the Dwellers and Outsiders that add texture to their respective myths; her characters are brave and complex and her prose smooth and evocative. Inspired, offbeat and mesmerizing.” -- Kirkus