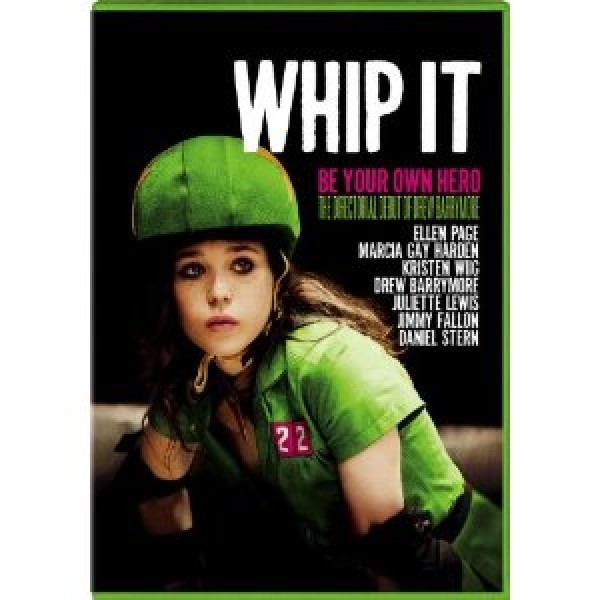 Hang onto your helmet and get ready to break away from the pack! Ellen Page scores huge laughs as Bliss Cavendar, a small-town teenager with a big dream: to find her own path in the world. Tired of following in her family's footsteps of compliance and conformity, Bliss discovers a way to put her life on the fast track...literally. She lands a spot on a rough-and-tumble roller derby team and becomes "Babe Ruthless" -- the hottest thing on eight wheels! Co-starring Drew Barrymore (in her feature film directorial debut), Marcia Gay Harden, Juliette Lewis, Daniel Stern and Jimmy Fallon, Whip It is a triumphant, free-spirited comedy loaded with high-speed action and nonstop fun!

Drew Barrymore makes her bow as a director with this Roller Derby coming-of-age number, which shares the spirit of so many of Barrymore's movies: it's loosey-goosey, cheerful, and buoyant in waving its "Girls Rule!" flag. On screen, Barrymore relegates herself to a slapstick supporting role, handing the lead to Juno gal Ellen Page. Page plays a Texas teen with a yen to join Austin's Roller Derby squad, complete with new professional moniker Babe Ruthless, but she'll have to keep the side career secret from her beauty-pageant-obsessed Mom (Marcia Gay Harden) and football-watchin' Dad (Daniel Stern).

A coming-of-age tale emerges between bouts of skating on the RD track (Jimmy Fallon plays the goofy Derby announcer), with a dash of romance added in the form of a generic Dude in a Band. Kristen Wiig does surrogate-mom duty as a teammate, Juliette Lewis is appropriately out-there as a track rival, and Andrew Wilson (bro of Owen and Luke) gets some hilariously poker-faced lines in as the team's coach. All the pleasant stuff makes you almost overlook how ramshackle the movie is, and how standard-issue the parental tensions (even if Harden is a total pro, as always). Ellen Page doesn't offer the innate audience-friendly cuddliness of Barrymore herself--thus her apt casting as Juno's brittle heroine--but her rapt focus is something to behold. "Babe Ruthless" indeed.