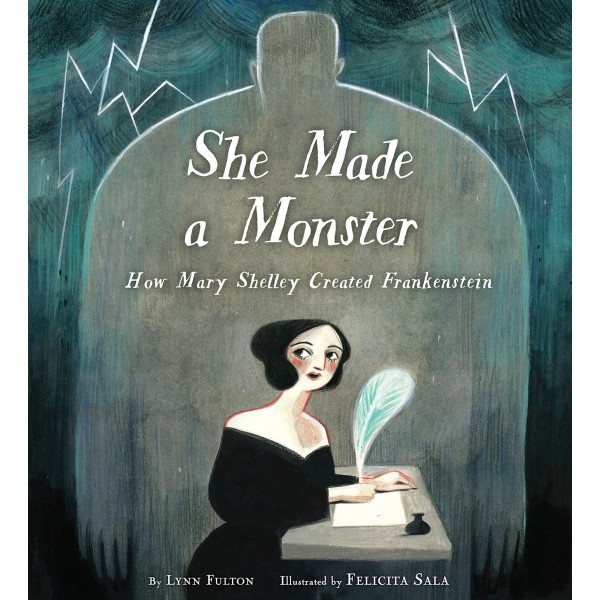 She Made a Monster: How Mary Shelley Created Frankenstein

On a stormy night two hundred years ago, a young woman sat in a dark house and dreamed of her life as a writer. She longed to follow the path her own mother, Mary Wollstonecraft, had started down, but young Mary Shelley had yet to be inspired. As the night wore on, Mary grew more anxious. The next day was the deadline that her friend, the poet Lord Byron, had set for writing the best ghost story. After much talk of science and the secrets of life, Mary had gone to bed exhausted and frustrated that nothing she could think of was scary enough. But as she drifted off to sleep, she dreamed of a man that was not a man. He was a monster.

This fascinating story gives readers insight into the tale behind one of the world's most celebrated novels and the creation of an indelible figure that is recognizable to readers of all ages.

"Fulton gives the story a feminist twist, reminding readers of the influence of Mary’s mother, Mary Wollstonecraft, whose 'stirring words about democracy and the rights of women' spur her daughter to prove that 'a woman’s writing could be just as important as a man’s.' Sala’s dramatic watercolor-and-ink illustrations, rendered in a controlled palette of predominately sepia and gray (excellent for limning livid, undead flesh), well-complemented by the classic typeface, evocatively depict the young white woman and the demons that beset her. An elegant picture book that will signal to young readers that there is more to the story than the familiar green-skinned monster." — Kirkus Reviews