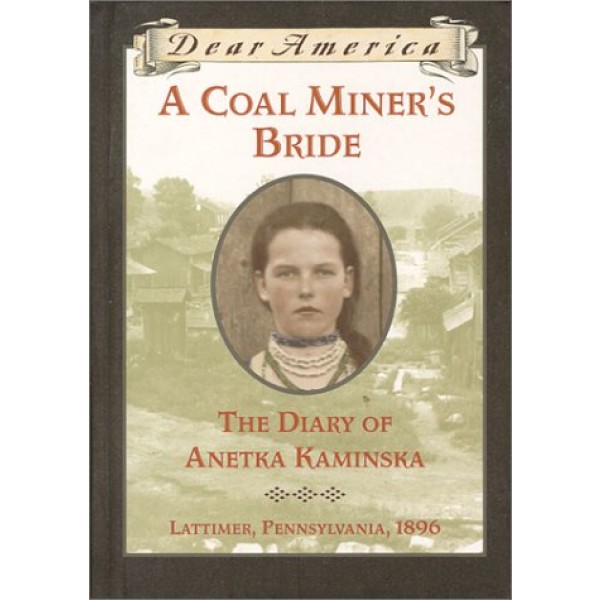 Meet Anetka, a 13-year-old Polish girl who comes to America as a promised bride to a coal miner. But her life in Pennsylvania isn't what she expected: instead of opportunity and prosperity, she finds an unloving husband, children still grieving their dead mother, and the grim and backbreaking work of keeping house in a coal town. Working conditions at the mines are unsafe and brutal, despite agitation from the labor movement, and when Anetka's husband becomes the next miner to die in an accident, she'll have to draw on all her strength to survive — and maybe even find love and joy.

This powerful story from the Dear America series uses diary entries to bring life in a coal mining town in the late 1800s to life. An author's note and other historical details flesh out the historical detail, but it's Anetka's determination that shines through in every word.

Plucky Anetka is determined to thrive in her new life in an arranged marriage to a Pennsylvania coal miner. In spite of the fact that her husband doesn't love her, his three daughters still mourn their dead mother, and she has left behind everything she knows and loves in Poland, this 13-year-old redhead rolls up her sleeves and gets down to the backbreaking business of keeping house.

Working conditions in the mines are horrendous and the labor movement is rumbling; nearly every day, wives watch in frightened yet resigned anticipation as the Black Maria, the "death wagon," rattles down the street to the newest widow's door. When the Black Maria shows up at Anetka's shanty just a few months after her wedding, she must dig deeper into her reserves of strength to carry on. Luckily, a young man named Leon has been patiently waiting in the wings. Their relationship is sweetly immature--until the very end, she persists in trying to convince herself she can't stand him because he teases her.

The fact that there are no real surprises in Susan Campbell Bartoletti's historical novel will not detract from readers' enjoyment of the story. The emphasis is on the historically accurate descriptions of coal mines in Lattimer, Pennsylvania, during the late 1890s. An informative author's note, photographs, notes to a coal-mining song, and even a tantalizing recipe for potato dumplings round out this fascinating portrait of a grim time in history. As with the other titles in the immensely popular Dear America series, A Coal Miner's Bride is written in the form of a diary. -- Emilie Coulter

Campbell Bartoletti is the award-winning author of several books for young readers, including Potatoes: The Story of the Great Irish Famine, 1845-1850, winner of the Robert F. Sibert Medal.