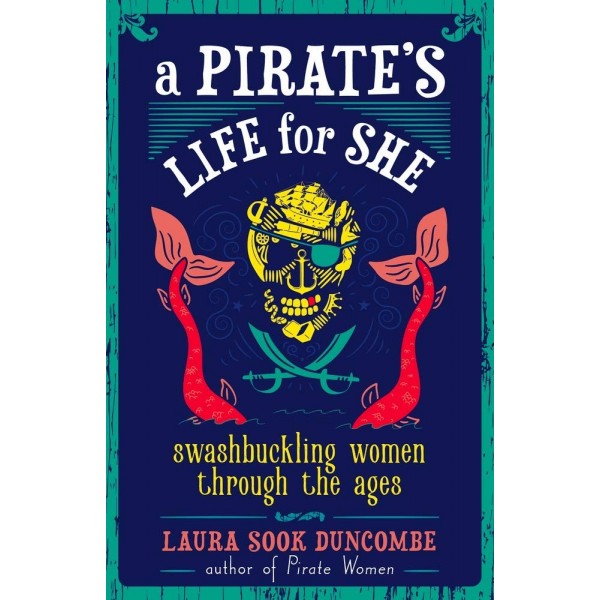 A Pirate's Life for She

Pirates are an enduring popular subject, depicted often in songs, stories, and Halloween costumes. Yet the truth about pirate women — who they were, why they went to sea, and what their lives were really like — is seldom a part of the conversation. In this Seven Seas history of the world’s female buccaneers, A Pirate's Life for She tells the story of 16 women who through the ages who sailed alongside — and sometimes in command of — their male counterparts. These women came from all walks of life but had one thing in common: a desire for freedom.

History has largely ignored these female swashbucklers, until now. Here are their stories, from ancient Norse princess Alfhild to Sayyida al-Hurra of the Barbary corsairs; from Grace O’Malley, who terrorized shipping operations around the British Isles during the reign of Queen Elizabeth I; to Cheng I Sao, who commanded a fleet of 1,400 ships off China in the early 19th century.

Author Laura Sook Duncombe takes an honest look at these women, acknowledging that they are not easy heroines: they are lawbreakers. Still, it is possible to admire the courage, determination, and skills these women possessed without endorsing her actions. These are the remarkable stories of women who took control of their own destinies in a world where the odds were against them, empowering young women to reach for their own dreams.

"Duncombe (Pirate Women, 2017, etc.) is invested in her topic, stressing how these historical figures who rebelled against the status quo can help modern women feel empowered. She also acknowledges the difficulty of establishing firm historical facts in many cases and often includes contradictory reports, encouraging readers to be open to different interpretations.... A thought-provoking treatise on charting one’s destiny without societal constrictions." — Kirkus Reviews