Over The Rainbow: "The Wizard of Oz" Classic Film Celebrates 80th Anniversary

There are few stories from American literature and film as well known as The Wizard of Oz! Whether you read the book first or marveled at the classic MGM movie, Dorothy Gale and her friends Toto the dog, the Scarecrow, the Tin Woodsman, and the Cowardly Lion have been beloved by generations. Dorothy, famously played by actress Judy Garland, was one of the early 20th century's defining Mighty Girl characters, although her determination occasionally got her book into hot water — in 1928, the book was banned from public libraries in Chicago "for depicting women in strong leadership roles"!

Today, the movie musical, which delighted audiences with its vibrant use of Technicolor and its award-winning song "Over The Rainbow," is celebrating its 80th anniversary. In honor of this milestone, we're sharing some of our favorite books, toys, clothing, and more paying tribute to this classic story. We're sure you'll find the perfect thing for anyone who's dreamed of flying beyond the rainbow to a land called Oz!

Books, Clothing, and More Celebrating Dorothy and The Land of Oz 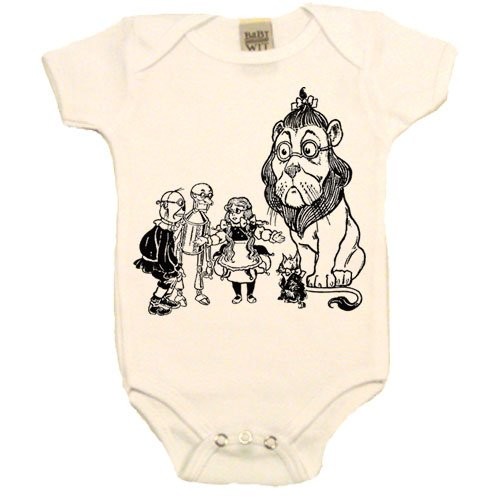 Let her have dreams of a land beyond the rainbow in this 100% cotton baby onesie from Baby Wit! This onesie features vintage cover art from L. Frank Baum's classic novel, available on your choice of several different background colors. Plus, parents will love that it's made in the USA and sweatshop free! 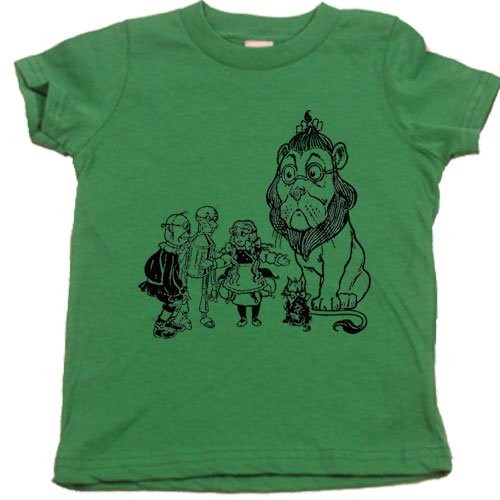 Show off your love for Dorothy Gale and her friends with this beautiful shirt from Baby Wit! This 100% cotton shirt features vintage artwork on your choice of a variety of background colors. Plus, it's sweatshop free and made in the USA! 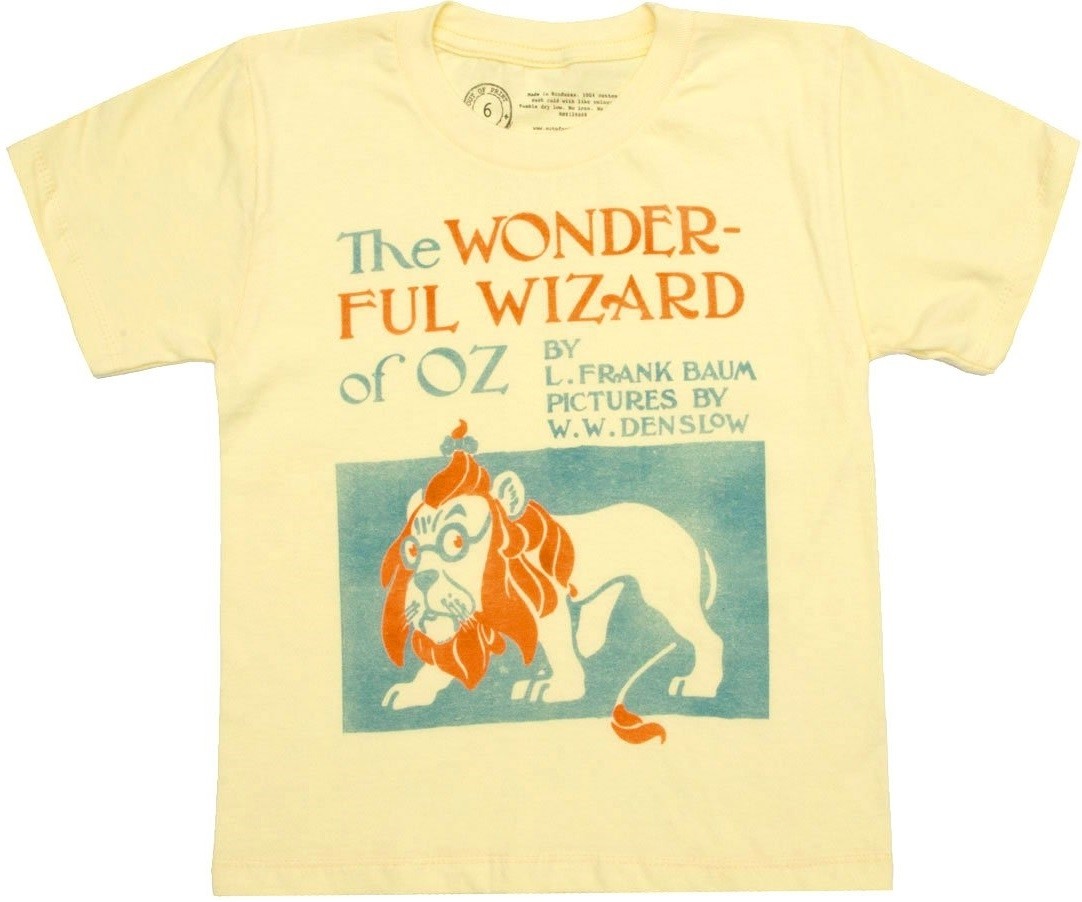 Fans of Dorothy and her friends in Oz will love this 100% cotton shirt from Out of Print featuring vintage cover artwork! This officially licensed shirt is soft and comfortable to wear, and parents will love that Out of Print's charitable outreach program supports literacy programs for communities in need. 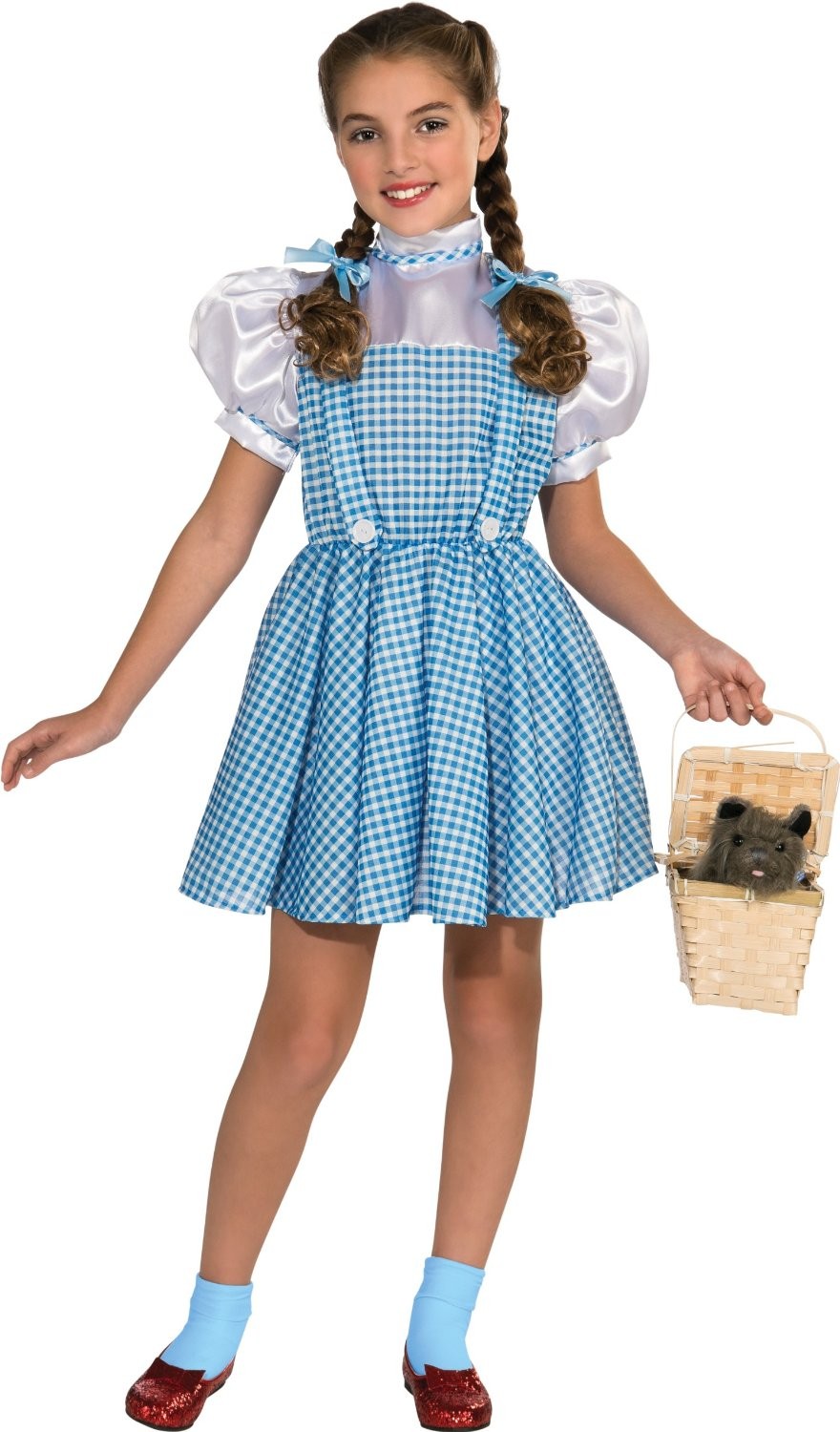 This officially licensed Dorothy Costume is perfect for any little girl who loves the fantasy and enchantment of The Wizard of Oz! She'll look and feel just like Dorothy Gale in this quality child character costume. This costume set includes a blue gingham dress and blue hair bows. Please note: shoes, socks, and basket not included.

You'll stop her — and her little dog, too! In this officially licensed, 75th anniversary edition Wicked Witch of the West costume, she'll feel ready to take on the whole Land of Oz. The costume includes a black dress with a glittering flying monkey design, an attached cape, and a cone-shaped hat. Please note: tights/shoes not included. For adults, check out this Elphaba / Wicked Witch Costume. 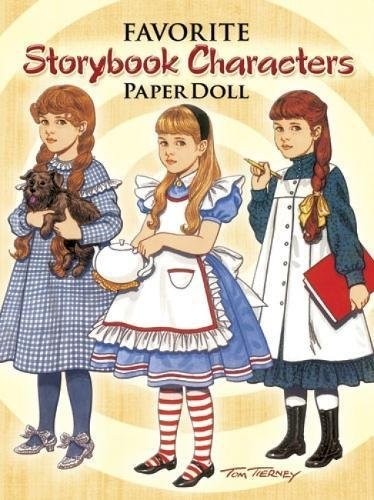 Let her imagine herself as some of her favorite storybook characters — including the Dorothy from The Wonderful Wizard of Oz, Anne of Green Gables, Alice in Wonderland, and many more! One paper doll comes with 8 costumes matching a variety of different storybook characters will provide hours of imaginative play.

The Wizard of Oz 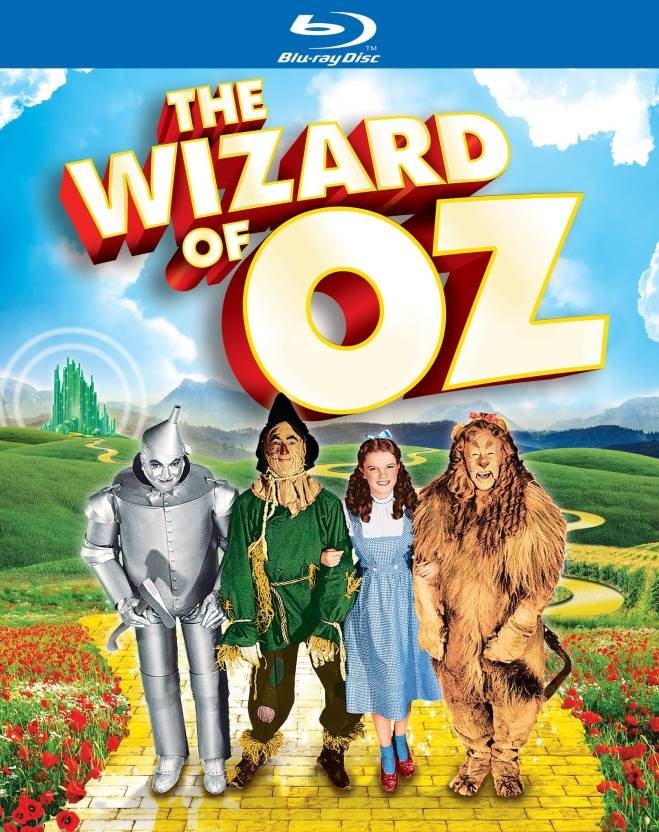 The Wizard of Oz

Recommended Age: 5 and up

Join Dorothy Gale and her little dog Toto on an adventure to a magical world in one of the most beloved movies of all time! This 75th anniversary Blu-Ray edition of MGM's classic film includes an all-new feature length documentary about the making of the film and its cultural impact, commentary from both historians and cast members, and much more. It's the perfect choice for either long-time fans, or to introduce a new generation to the wonder of Oz.

The Wonderful Wizard of Oz 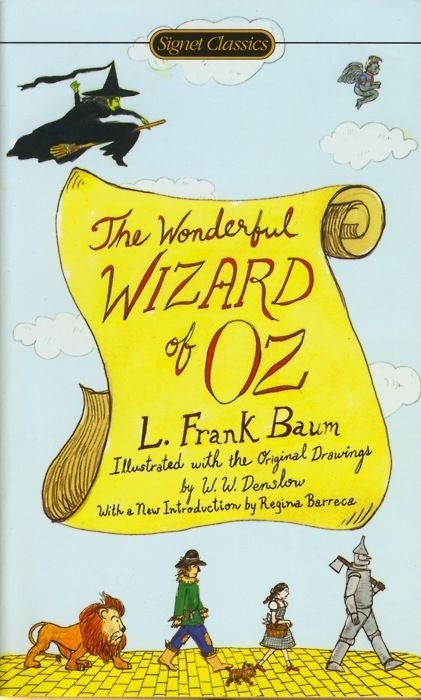 The Wonderful Wizard of Oz

Dive back into the beloved world of Oz — or introduce someone new to it — with this edition of L. Frank Baum's classic The Wonderful Wizard of Oz! When Dorothy and her dog Toto are swept away by a tornado, familiar sights like a scarecrow, a woodsman, a traveling magician, and more get transformed into residents of the mysterious and magical world of Oz. But there are many fearful and dangerous things in Oz as well, and Dorothy will have to face them head on if she's ever going to get home to Kansas. Thrilling and fantastical, this American fairy tale delights modern readers just as it did when it was first released in 1900. 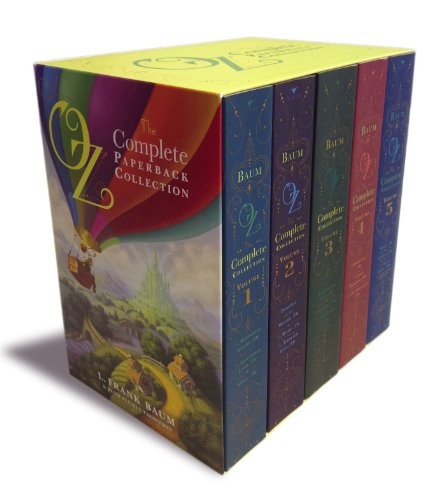 Written by: L. Frank Baum
Recommended Age: 8 and up

Venture into Oz, the mysterious and magical world of witches and wizards, scarecrows and mechanical men, and much more! The cherished American fairy tale series is now available in a complete set of paperbacks From the moment Dorothy set foot on the Yellow Brick Road, readers were hooked. Fifteen books later, there was a whole world full of unique characters to explore — and many of them are Mighty Girls. This set compiles all fifteen books into five paperback volumes, so fans of Oz can read the whole thing from beginning to end. 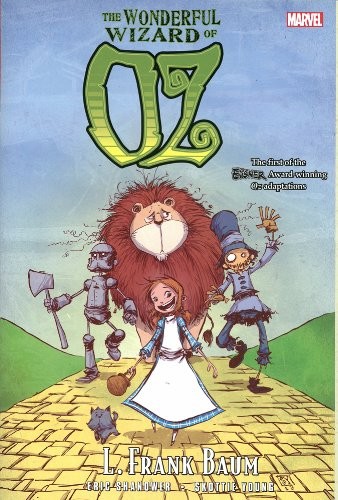 Written by: Eric Shanower
Illustrated by: Skottie Young
Recommended Age: 9 and up

Join Dorothy Gale and all her friends in this stunning graphic novel adaptation of L. Frank Baum's classic story! Award-winning writer/artist Eric Shanower teams up with fan-favorite artist Skottie Young in this Merry Marvel graphic novel. Together, they create an authentic adaptation that's true to the original story — capturing both the wonder and the dangers of Oz — while also adding their own modern touches. 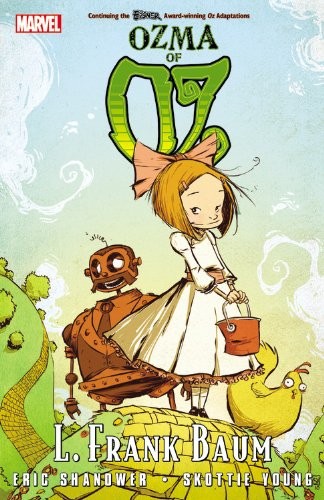 Written by: Eric Shanower
Illustrated by: Skottie Young
Recommended Age: 9 and up

Dorothy isn't in Kansas — but she's not in Oz either! When Dorothy gets washed off a ship with a clever chicken named Billina, she ends up in the Land of Ev, across the desert from Oz. She also finds herself in the middle of a dangerous time: the wicked Nome King has imprisoned Ev's royal family and has plans for Oz as well. With the help for old friends like the Tin Woodsman and the Scarecrow, and new ones like Tik-Tok the mechanical man and Ozma, the new Queen of Oz, Dorothy must save the day and make her way home again. This beautiful graphic novel adaptation of Ozma of Oz will delight fans of L. Frank Baum's wider world. 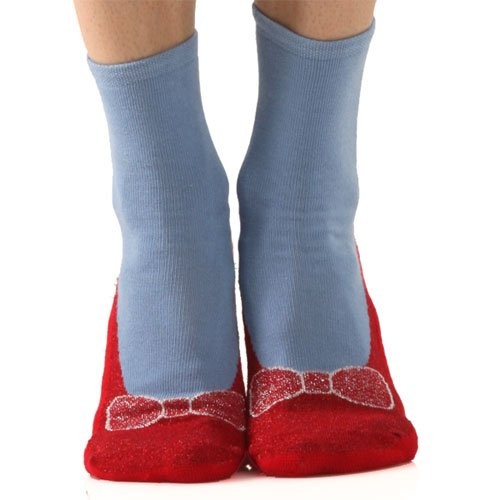 Heading over the rainbow? Keep your feet warm in these whimsical slipper socks from Foot Traffic that are made with shimmering metallic thread. You'll love the unique design and the non-slip grippers that help avoid spills when you're walking on smooth floors rather than the Yellow Brick Road. These cotton/nylon/spandex blend socks are available in one size that fits women's shoe sizes 4 - 10. 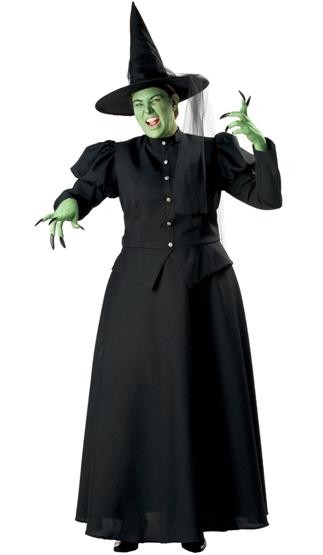 Fans of The Wonderful Wizard of Oz or Wicked will love this costume of Elphaba, the Wicked (or maybe not so wicked) Witch of the West. This costume set includes a dress and hat and is available in adult and adult plus sizes. 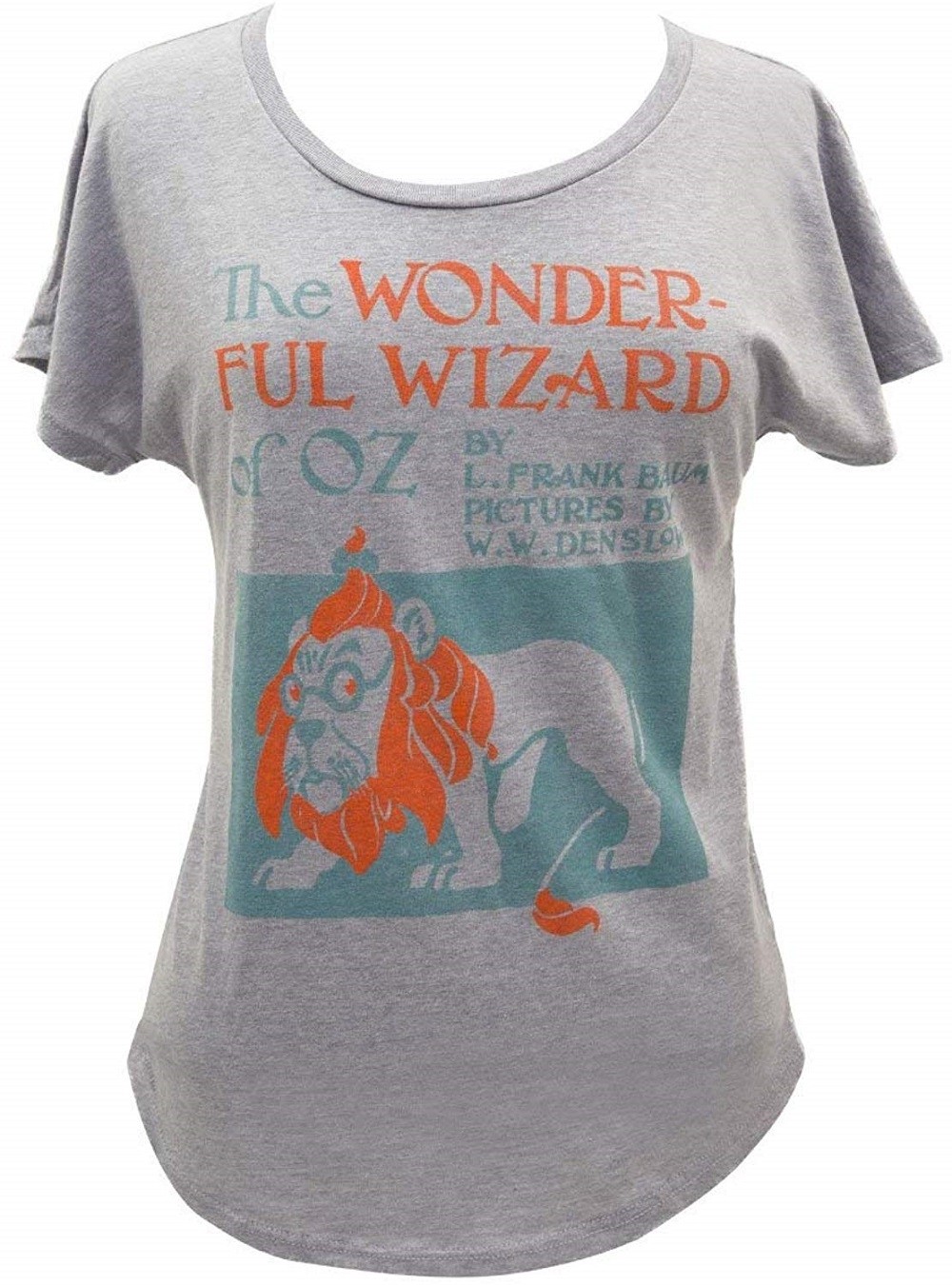 Brand: Out of Print
Recommended Age: 13 and up

Show off your love of Dorothy and all her friends from Oz — and contribute to literacy programs around the world — with this shirt from Out of Print! This 60% cotton, 40% polyester dolman sleeve shirt has a heather grey background and a distressed print of cover art from an early edition of L. Frank Baum's classic novel. For every shirt purchased, Out of Print's charitable outreach program will donate to literacy initiatives for communities in need.

This entry was posted in Misc, Front Page and tagged books, classics on August 25, 2019 by Katherine. ← Previous Post Next Post →