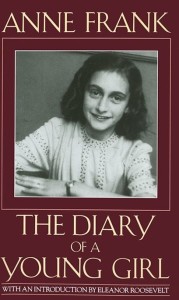 “Think of all the beauty still left around you and be happy.” — Anne Frank

Stories about the Holocaust can seem very distant to a child today: decades of time and, more importantly, vast differences in life experiences separate them from the life of a persecuted girl suffering from the Nazi regime. And then, at some point, she will read Anne Frank’s Diary of a Young Girl (which we recommend for ages 11 and up) and, suddenly, there is a face to this painful history: the face of a girl her age, whose dreams, thoughts, and emotions are like her own.

When the facts and figures of Holocaust history — the vast numbers of displaced or dead — are inconceivable, the life of this one girl, hiding with her family in a desperate effort to save themselves, is strikingly real.

And yet the inspiring thing about Anne Frank’s life and writing is that she was never beaten down by the hatred directed at her. Instead, she continued to see the best of humanity. As she wrote, “It’s really a wonder that I haven’t dropped all my ideals, because they seem so absurd and impossible to carry out. Yet I keep them, because in spite of everything I still believe that people are really good at heart.” Her astounding optimism and resiliency have inspired girls — and the world — for generations, ever since the loose pages of her diary left Otto Frank’s hands to be published in 1947.

To honor this amazing spirit, A Mighty Girl has put together this collection of our favorite resources for young people about Anne Frank. This selection features books, movies, and even a poster that make tribute to the girl whose optimism and hope lasted through it all. 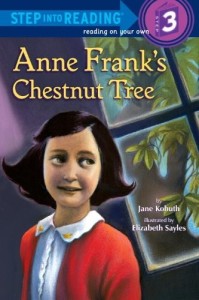 In addition to her famous diary, there are many excellent books about Anne Frank, her life, and the influence of her writing. Any of these books will help your Mighty Girl to expand her understanding of Anne and her importance.

The Holocaust, and Anne's life and death, can be a difficult topic to discuss with younger readers. For the youngest readers, two books that focus on the nature that surrounded her provide a gentle introduction to her story. In Anne Frank and the Remembering Tree by Sandy Eisenberg Sasso and illustrated by Erika Steiskal (age 5 - 8), Sasso takes an unusual perspective on Anne's life: the story is from the point of view of the tree that grows outside the window of Otto Frank's business offices — the one that is visible from the Secret Annex. While the story includes references to the soldiers during the Nazi occupation, and to Anne's removal from the Annex, the tree — which still exists today #151; serves as a reminder of Anne's legacy of hope.

Anne Frank's Chestnut Tree, by Jane Kohuth and illustrated by Elizabeth Sayles (age 5 - 8), also shows the influence of one beautiful tree on Anne's outlook and writings. This Step Into Reading level 3 reader captures how, when she and her family were closed in the Annex unable to see even the blue sky above, the chestnut tree outside the window provided a hint of natural beauty to sustain Anne's courage and optimism. This early reader biography also provides a great opportunity for newly independent readers to learn about Anne's remarkable life and writing. 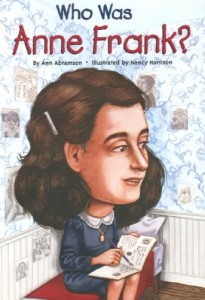 A Picture Book of Anne Frank by David Adler, illustrated by Karen Ritz (age 6 - 10) is a great introduction to who she was and the circumstances that led to this seemingly ordinary girl becoming a figure recognized around the world. Adler’s work “balances candor with discretion” (Publishers Weekly) as it chronicles her earliest years, the time hiding in the Annex, and the months following her arrest and deportation. Ritz’s watercolors capture the life and hope of Anne, even in her depictions of Anne and Margot at the Bergen-Belsen camp. This portrait is respectful of the subject matter, but very age appropriate.

From the Who Was...? series comes the biography Who Was Anne Frank?, written by Ann Abramson and illustrated by Nancy Harrison (age 7 - 11). This easy to read and accessible biography talks about Anne’s life, both before and during the time hidden in the Annex, and also examines the legacy of her diary. Black and white illustrations include maps and diagrams to provide additional context. This title provides a great introductory biography for kids who aren’t ready for full chapter book biographies. 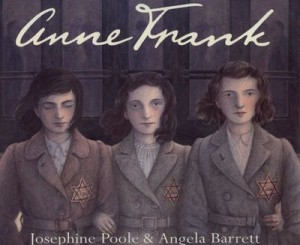 For a picture book aimed at older readers, Anne Frank by Josephine Poole, illustrated by Angela Barrett (age 8 - 10), provides a perspective more focused on Anne’s almost ordinary nature — a girl who would be like many others, except for the extraordinary time in which she lived. Poole strives to create a context for the famous diary and time in the hidden rooms, and Barrett’s realistic paintings do the same, showing hints of the times like looming posters of Hitler’s face and broken glass in a Jewish-owned shop. The book concludes with a detailed chronology, making it well suited whether the reader is familiar with Anne’s diary, or has yet to read it.

In Anne Frank and the Children of the Holocaust by Carol Ann Lee (age 9 and up), Anne’s story is combined with that of the millions of other children whose lives were touched by the Holocaust. Lee includes personal accounts from other survivors, excerpts from writings by other victims, and black and white photos of both the Franks and others. The book captures both the shocking spiral of the Frank family from productive, proud German citizens to concentration camp residents, as well as the many remarkable ways in which children throughout Europe coped with these difficult times. 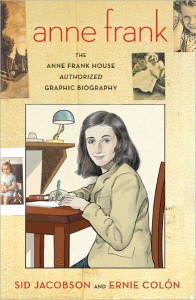 For a different way of presenting Anne Frank’s history, consider Anne Frank: The Anne Frank House Authorized Graphic Biography by Sid Jacobson and Ernie Colon (age 11 and up). This graphic novel history tells the Frank family’s whole story, as well as providing snapshots of critical moments separate from the Frank family’s experience, such as the Nuremberg Laws and Kristallnacht. While no less detailed or accurate than chapter book histories, this book makes reading about Anne Frank more accessible to many kids — and adults.

And for a book that includes dozens of never-before-published photographs, consider Anne Frank: Her Life in Words and Pictures by Menno Metselaar and Ruud van der Rol (age 11 and up). This book was produced in conjunction with the Anne Frank House, providing access to material like school pictures, family snapshots, and photos of the diary’s pages and the Annex. Now translated from the original Dutch, this book can work either as a stand-alone introduction to Anne’s life or as a companion to her diary. This elegant, small volume includes interspersed quotes from the diary, but focuses on the narrative of both World War II history and the Frank family.

In addition to the stage adaptation of The Diary of a Young Girl, there are a few high-quality movie adaptations that tell the story of Anne Frank’s life. These make excellent companions to reading her diary or to any exploration of the experiences of Jewish people during the Holocaust. 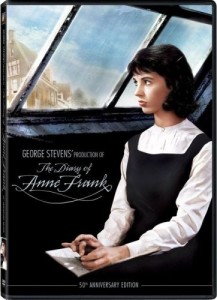 One of the first acclaimed movie versions of Anne's life was 1959's The Diary of Anne Frank (age 10 and up), which starred Millie Perkins as Anne. The movie took the world by storm on its release; it was nominated for eight Oscars and won three, including Best Supporting Actress for Shelley Winters' depiction of Petronella van Daan (the pseudonym Anne gave to August van Pels in her diary.) The movie was re-released in this excellent special edition DVD for its 50th anniversary in 2009; the DVD includes several featurettes, including cast interviews and discussions about the history of Anne's diary.

A more recent film version of Anne's life, which strives to provide a more historically accurate and less dramatized depction of the events in the Secret Annex, is Anne Frank: The Whole Story (age 10 and up). The movie, which stars Hannah Taylor Gordon as Anne and Ben Kingsley as Otto Frank, depicts Anne’s whole life: her happy, spirited life before the war, her time in the Annex and writing her diary, and her experiences once her family was betrayed and shipped to the concentration camps. Taylor Gordon captures all the contradictions of a girl Anne’s age, at times intelligent, creative, and joyful, but, at others, spoiled and petulant, making her a relatable and real character. Sections of the film are painful to watch — especially in the conclusion, where it pulls no punches about the reality of Auschwitz and Birkenau — but this excellent adaptation is well worth watching for anyone interested in Anne, her diary, or Holocaust history.

Masterpiece Theatre’s The Diary of Anne Frank (age 10 and up) is a very recent production of this amazing story. First aired in 2010, this film was produced by the BBC, which worked with the Anne Frank Fonds organization to ensure the authenticity of the work. Sets are highly-detailed reconstructions of the Frank family’s home and hiding place, and great care was put into the actors’ performances. This production channels all the real emotions of the diary’s narrative — the tension is there throughout, but there are also moments of laughter and tenderness. Above all, it reminds the viewer that the story of Anne and her family is the story of a family — one like any other — under extraordinary circumstances.

A Spirit of Hope and Optimism 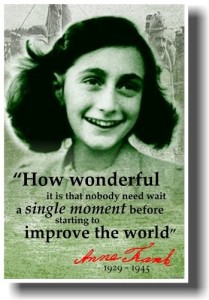 “How wonderful it is that nobody need wait a single moment before starting to improve the world.” — Anne Frank

Anne Frank has inspired people around the world for decades — and will continue to do so for decades more — because even in a time of such horror and tragedy, she maintained her belief that the world was a beautiful place. Quotation after quotation from her diary reiterates that people are good; that the world will be happy again; and, as she says above, that anyone can choose, now, to make the world a better place to live.

This wonderful Anne Frank poster includes the quote above and an image of Anne herself. At 12 by 18 inches, it is perfect for framing and for use either at home or in the classroom. This inspiring image will remind everyone who sees it of the power that even the seemingly insignificant have to produce change. After all, who would have guessed that the diary of one girl would become a classic of modern literature — one which encourages us all to work for positive change in our world.