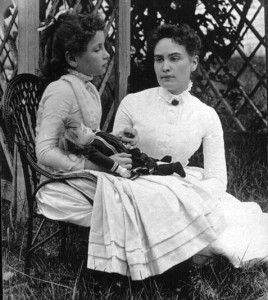 Today in Mighty Girl history, Anne Sullivan, famously known as the teacher and companion of Helen Keller for 49 years, was born today in 1866. The child of poor Irish immigrants, Sullivan herself went blind as a child due to untreated trachoma and was sent to the Perkins School for the Blind in Boston. Though her vision was partially restored after surgery, she remained visually impaired throughout her life.

After Sullivan graduated as class valedictorian, the school director recommended the 20-year-old for a position teaching 6-year-old Helen Keller in the small town of Tuscumbia, Alabama. Keller, who had been left blind and deaf due to disease as a toddler, had very limited means of communication but her young teacher soon helped her break out of, as Keller later described, the "silence and darkness that surrounded me."

Keller's famous breakthrough in understanding that every object had a unique sign identifying it came when Sullivan ran cool water over her student's hand while signing the word "water" with the other. After this realization, Keller became a vigorous learner, eager to learn the signs for all of the other objects in the world around her.

Sullivan stayed by Keller's side for 49 years, helping her on her journey to become the first deaf-blind person to earn a Bachelor of Arts degree and later become world famous as a writer and advocate on behalf of women's suffrage, labor rights, and disability rights. Together, they traveled to over 40 countries as Keller became the world's most prominent voice speaking on behalf of the rights of people with disabilities. 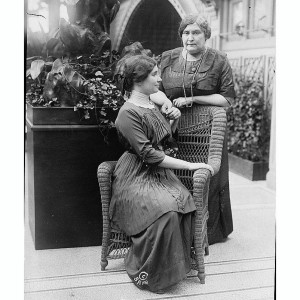 In describing the transformative impact Anne Sullivan had on her life, Keller once stated, "Once I knew only darkness and stillness... my life was without past or future... but a little word from the fingers of another fell into my hand that clutched at emptiness, and my heart leaped to the rapture of living."

Of course, there is a large assortment of books for young readers about Helen Keller's life and Anne Sullivan plays a major role in all. To browse the entire selection, visit our Helen Keller Collection.

The excellent film about their story, The Miracle Worker, is also highly recommended for ages 8 and up.

For more stories about the special relationship between Mighty Girls and their teachers, visit our Teacher section.