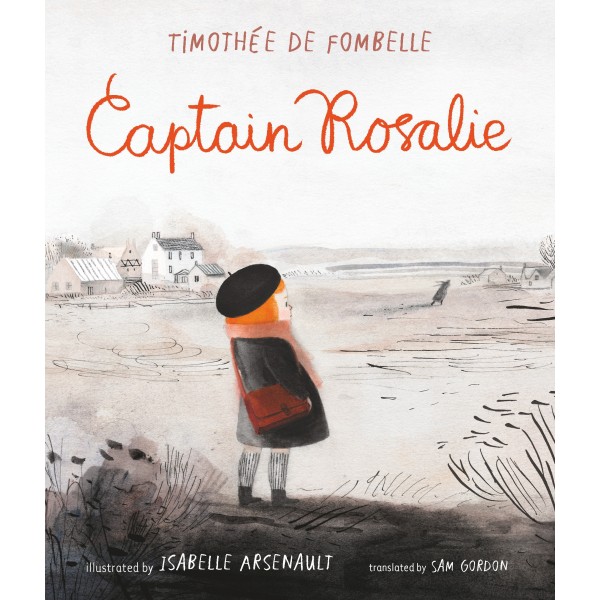 While her father is at war, five-year-old Rosalie is a captain on her own secret mission. She wears the disguise of a little girl and tracks her progress in a secret notebook. Some evenings, Rosalie's mother reads aloud Father's letters from the front lines, so that Rosalie knows he is thinking of her and looking forward to the end of the war and to finally coming home. But one day a letter comes that her mother doesn't read to her, and Rosalie knows her mission must soon come to an end.

Author Timothée de Fombelle reveals the true consequence of war through the experiences of small, determined Rosalie, while acclaimed artist Isabelle Arsenault illustrates Rosalie's story in muted grays marked with soft spots of color — the orange flame of Rosalie's hair, the pale pink of a scarf, the deep blue ink of her father's letters. All the more captivating for the simplicity with which it is drawn and told, this quiet tale will stay with the reader long after its last page is turned.

"De Fombelle has created an interesting plot with a surprising perspective. Readers are quickly drawn into the world Rosalie describes through first-person perspective and are left wondering what mission she is on. This perspective also allows for the difficult subject of World War I to be addressed at a child-friendly level, while not hiding the tragedy, as readers learn through Rosalie's thoughts.... Together, De Fombelle and Arsenault have created a persevering tale about a young captain and her search for some truth in the darkest of times." — Margaret Kennelly, School Library Journal