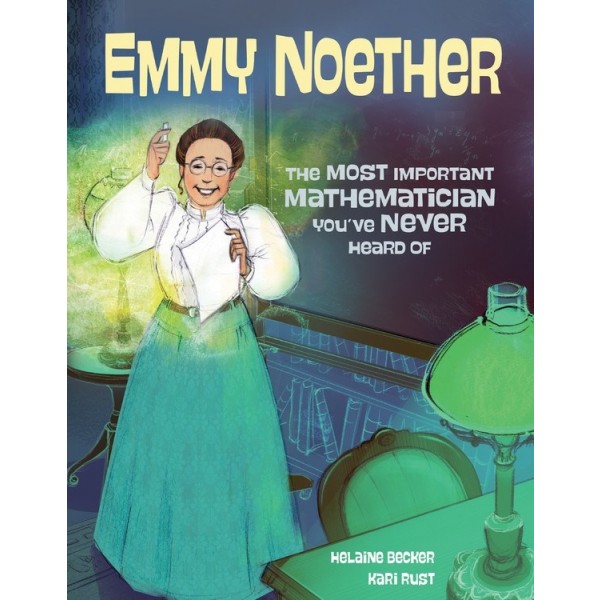 Emmy Noether: The Most Important Mathematician You've Never Heard Of

Emmy Noether is not pretty, quiet, good at housework or eager to marry — all the things a German girl is expected to be in her time. What she is, though, is a genius at math. When she grows up, she finds a way to first study math at a university (by sitting in, not actually enrolling) and then to teach it (by doing so for free). She also manages to do her own research into some of the most pressing math and physics problems of the day. And though she doesn't get much credit during her lifetime, her discoveries continue to influence how we understand the world today.

Bestselling and award-winning Helaine Becker has crafted an engaging look at the life of Emmy Noether, a contemporary of Einstein's and one of the most influential, though little known, mathematicians of the 20th century. Despite the obstacles she faced as a woman in a male-dominated field, and as a Jew who had to flee the Nazis, Emmy still accomplished great things. Artwork by Kari Rust uses touches of humor for emphasis and a golden glowing effect around Emmy to visually express her brilliance and ideas, capturing a poignant story about courage, perseverance, and a love of math.

"Clear, straightforward text that is full of drama and excitement and striking, evocative art with a subtle sense of humor portray her unusual life, quirky personality, struggles with sexism and anti-Semitism, and groundbreaking discoveries in clear, easy-to-understand detail.... Noether’s single-mindedness and accomplishments are sure to inspire admiration while the injustices she faced and her own quiet rebellion may lead many young readers to further questions and exploration." — Kirkus Reviews