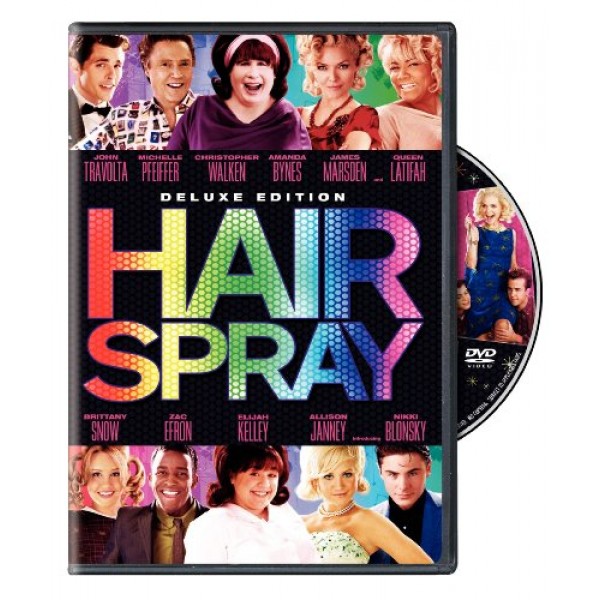 In 1962 Baltimore, chunky Tracy Turnblad (Nikki Blonsky) dreams big: land a gig on the see-and-be-seen TV teen-scene hit The Corny Collins Show, win the heart of the nicest and cutest boy in school (Zac Efron), and strike a blow for civil rights. And whaddaya know -- it all comes true! Boppin' with all the joy of the long-running, award-winning Broadway musical smash and blazing with sublime star power (including John Travolta and Christopher Walken as Tracy's devoted, dance-happy mom and dad), "Hairspray earns knockout status for its humor, heart and high spirits. A plus-size bundle of fun" -- Rolling Stone

It's rare that a movie captures the intensity and excitement of a live Broadway musical production while appealing to a broader movie-going audience, but the 2007 Hairspray is an energetic, powerfully moving film that does just that. A remake of the 1988 musical film Hairspray, the new Hairspray is a film adaptation of the 2002 Broadway musical and features more likeable characters than the original film and an incredible energy that stems from a great cast, fabulous new music, and the influence of musical producer Craig Zadan.

What remains constant throughout all three versions of Hairspray is the story's thought-provoking exploration of prejudice and racism. Set in Baltimore in 1962, the film opens with chubby girl Tracy Turnblad (Nikki Blonsky) singing her heart out in a rendition of "Good Morning Baltimore" that, while admittedly a bit too long, sets the farcical tone for the film. Viewers quickly become immersed in Tracy's teenage world of popular television dance shows, big hair, the stigma of being different, and the first hesitant steps toward racial integration within a segregated world. The Corny Collins (James Marsden) television dance show is a teenage obsession in Tracy's world and Link Larkin (Zac Efron) is every girl's dream partner, so when a call for auditions goes out, Tracy skips school to try out, but is rejected by station manager Velma von Tussle (Michelle Pfeiffer) because of her large size and the threat of competition for Velma's own daughter Amber (Brittany Snow).

Perseverance and the support of her friend Penny (Amanda Bynes), father Wilbur (Christopher Walken), and negro dancer Seaweed (Elijah Kelley) lead Tracy to the spotlight and the chance of a lifetime, but more and more Tracy discovers that fairness and equality for those who are different does not come without a fight and that sacrifices must be made to effect change. While the message is serious, Hairspray is first and foremost a comedy with stellar performances by John Travolta as Edna Turnblad (who ever imagined Saturday Night Fever's iconic star would appear onscreen as a woman?), Christopher Walken, and Michelle Pfeiffer. Part of what makes Hairspray so powerful is the exceptional music composed by Marc Shaiman, including songs newly composed for the movie like "Ladies' Choice," "The New Girl in Town," and "Come So Far," and the awesome vocal talents of Queen Latifah (Motormouth Maybelle) and a cast of heretofore musically-unknown actors like Nikki Blonsky, Zac Efron, and Brittany Snow who really can sing.

Notable trivia includes Jerry Stiller's appearance in both versions of the film (as Wilbur in the 1988 film and as Mr. Pinky in this 2007 rendition), and a cameo appearance by 1988 director and screenplay writer John Waters. Hairspray is one of the best films of the year--it's powerfully moving entertainment that leaves you energized and motivated to fight for what you believe in. -- Tami Horiuchi