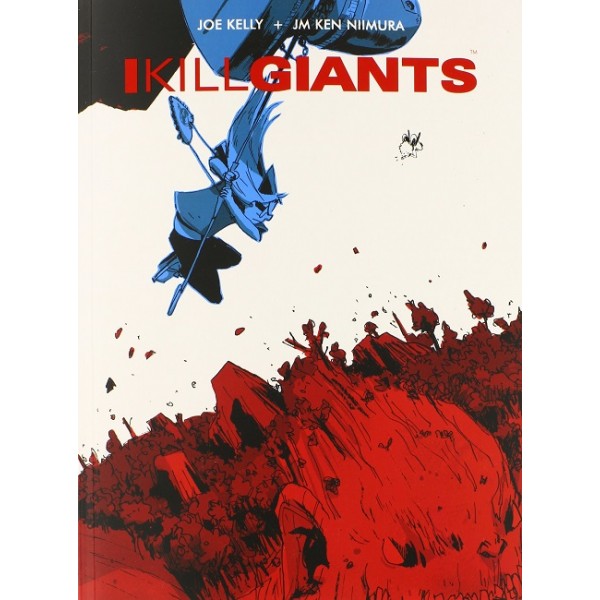 I Kill Giants tells the story of Barbara Thorson, an acerbic fifth-grader so consumed with fantasy that she doesn't just tell people that she kills giants with an ancient Norse warhammer - she starts to believe it herself. The reasons for Barbara's troubled behavior are revealed through the course of the book, as she learns to reconcile her fantasy life with the real world. battling monsters both real and imagined. In the end, Barbara kicks butt, takes names, and faces her greatest fear in this bittersweet, coming-of-age story called "Best Indy Book of 2008" by IGN. This fifth anniversary edition of the graphic novel collects issues 1-7 of the series.

"I Kill Giants is easily accessible for teens, but it’s a true gem for adults as well. It, like Barbara, is lovely, wonderful, and one of a kind." -- Bookreporter.com

"Barbara Thorson, bullied and friendless, will not back down. She is smart, angry, won’t follow the rules, won’t let anyone close, and sees things no one else does. In short, she is a very disturbed girl, and the power of I Kill Giants is its ability to convey the reality of a frightened little girl’s pain along with the wonder of her apparent fantasies. As Barbara begins to let people in, her insistence that the giants are coming threatens these intensely longed-for relationships. Whether or not they exist, the metaphor of giants to symbolize the vast terrors of a person’s inner life has never been better realized . . . This is graphic storytelling at its zenith: employing fantasy to offer profound insight and take readers on a deeply emotional journey." -- Booklist