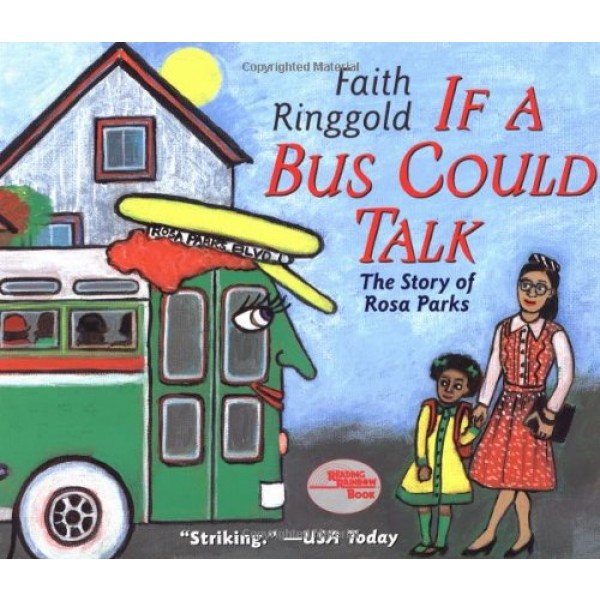 If A Bus Could Talk: The Story of Rosa Parks

If a bus could talk, it would tell the story of a young African-American girl named Rosa who had to walk miles to her one-room schoolhouse in Alabama while white children rode to their school in a bus. It would tell how the adult Rosa rode to and from work on a segregated city bus and couldn't sit in the same row as a white person. It would tell of the fateful day when Rosa refused to give up her seat to a white man and how that act of courage inspired others around the world to stand up for freedom.

In this book a bus does talk, and on her way to school a girl named Marcie learns why Rosa Parks is the mother of the Civil Rights movement. At the end of Marcie's magical ride, she meets Rosa Parks herself at a birthday party with several distinguished guests. Wait until she tells her class about this!

"All the events are depicted in emotive naive artwork that underscores their truth; Ringgold delivers Parks's story without hyperbole, but rather as a life lived with pride, conviction, and consequence." -- Kirkus Reviews

Faith Ringgold grew up in Harlem, has a master's degree in education, and has taught art in New York City public schools. Deeply influenced by the Black Power movement, Faith developed an art style based on her African-American heritage. She created a series of narrative quilts about the lives of black women, one of which inspired her first picture book, Tar Beach, winner of a Caldecott Honor Award and a Coretta Scott King Award for Illustration. She went on to publish several more acclaimed picture books, including Aunt Harriet's Underground Railroad in the Sky and My Dream of Martin Luther King.