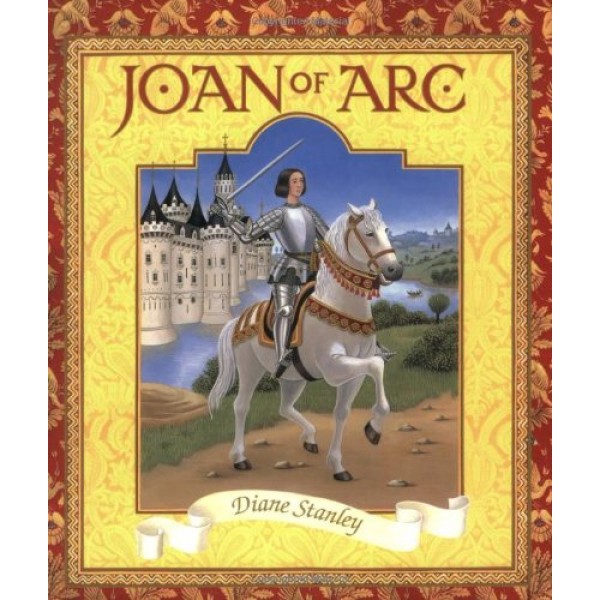 Against the fascinating tapestry of Frances history during the Hundred Years' War, Diane Stanley unfolds the story of the simple thirteen-year-old village girl who in Just a few years would lead France to independence from English rule, and thus become a symbol of France's national pride. It is a story of vision and bravery, fierce determination, and tragic martyrdom. Diane Stanley's extraordinary gift to present historical information in an accessible and child-friendly format has never been more impressive, nor her skillful, beautifully realized illustrations (here imitating medieval illuminated manuscripts) more exquisite.

"Appealing to the audience's intelligence and imagination, this book stimulates an interest in both its particular subject, Joan of Arc, and history in general." -- Publisher's Weekly

"Joan of Arc's story is both history and mystery. How a peasant girl living in a class-structured century, a female in a man's world of war and politics, an unlettered visionary in a church-dominated society could change the course of history has been an ever-intriguing puzzle. Stanley finds answers in Joan's own words spoken before the Inquisition during her trial for heresy and in the 115 eyewitness accounts recorded in the Trial of Rehabilitation held after her martyrdom. From these 15th-century documents and other sources, the author weaves an absorbing and convincing story of a naive, brave, and driven young woman willing to face death to accomplish God's will as she heard it in her "voices." Stanley does not answer the question of whether Joan's role was divine or human in origin, concluding, "Sometimes, in studying history, we have to accept what we know and let the rest remain a mystery." . . . This narrative description of the greatest of French saints is a work of art, a good story, and a model of historical writing." --School Library Journal