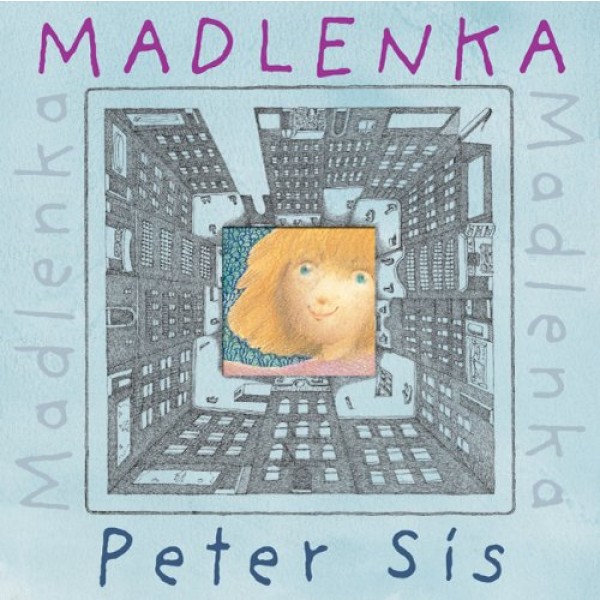 Peeking out through a die-cut window on the jacket, Madlenka invites the reader to enter her world. And what a world it is! On the surface, it looks like an ordinary city block, but as we meet Madlenka's neighbors -- the French baker, the Indian news vendor, the Italian ice-cream man, the Latin American grocer, a retired opera singer from Germany, an African American school friend, and the Asian shopkeeper -- and look through die-cut windows to the images and memories they have carried from old country to new, we can see that Madlenka's block is as richly varied as its inhabitants. And why is Madlenka going around the block, jumping for joy? Her tooth is loose, and she wants everyone to know!

"In the universe, on a planet, on a continent, in a country, in a city, on a block, in a house, in a window, in the rain, a little girl named Madlenka finds out her tooth wiggles." To further illustrate where exactly this girl fits into the universe, Peter Sí­s's endpapers depict a tiny blue planet Earth with a red dot, then a bigger Earth and a bigger red dot, then an aerial view of the south part of Manhattan Island, then city blocks, then lo! a small Madlenka in an apartment window. And, since she has a loose tooth that wiggles, she simply must tell everyone.

As she traipses around New York, she sees the whole world in the way a child might peer into a sugar egg at a colorful three-dimensional diorama within. At Mr. Gaston's patisserie, he tells her about Paris as he bakes croissants and madeleines. Readers peer through a die-cut square in his bakery window to glimpse the Eiffel Tower. Turn the page, and an exciting blue landmark map of Paris unfolds. (Is that a tiny petit prince we see as well?) At Mr. Singh's newspaper stand, our window on the world takes us to winged elephants and onion domes and the many-armed gods of India. Mr. Ciao from Italy ("Buon giorno, Maddalena") makes visions of the Leaning Tower of Pisa and cats on gondolas and the Coliseum dance through our heads. Throughout Sís's enchanting, moody illustrations dances blonde-haired, lavender-clad, yellow-booted Madlenka with her yellow umbrella -- reminding us of what is really important. "Madlenka! Where have you been?" "Well... I went around the world. And I lost my tooth!"

Fans of Sí­s's gorgeous work in Caldecott Honor Books Tibet: Through the Red Box and Starry Messenger: Galileo Galilei will find an equally stunning, but more accessible book in Madlenka. Children will discover enough fascinating details to stand up to hours of fierce page perusal, and adults will, as ever, marvel at Sí­s's breathtaking artistry. (Ages 4 to 8) -- Karin Snelson