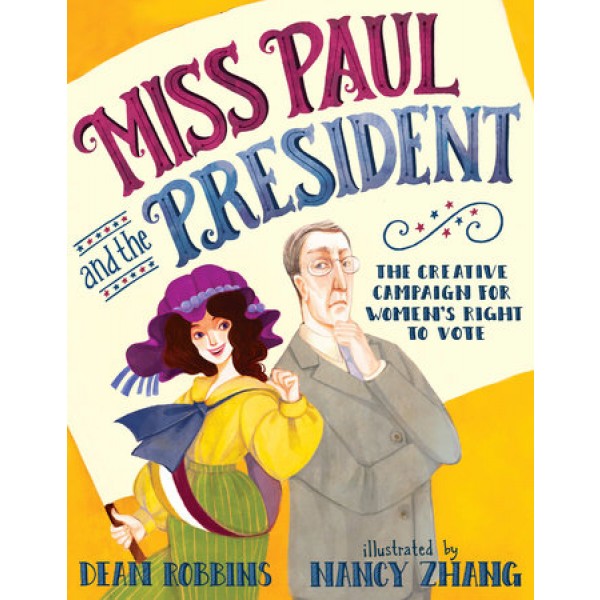 Miss Paul and the President: The Creative Campaign for Women's Right to Vote

When Alice Paul was a child, she saw her father go off to vote while her mother had to stay home. But why should that be? So Alice studied the Constitution and knew that the laws needed to change. But who would change them?

She would! In her signature purple hat, Alice organized parades and wrote letters and protested outside the White House. She even met with President Woodrow Wilson, who told her there were more important issues to worry about than women voting. But nothing was more important to Alice. So she kept at it, and soon President Wilson was persuaded.

Dean Robbins and illustrator Nancy Zhang bring the unsung hero to vivid life and show young voters-to-be how important it is to never back down from a cause you believe in!

"Watercolor and color pencil illustrations support this spirited view with lively movement and color as she is shown leading a parade of 8,000 women, sitting in President Wilson's office and looking him right in the eye, protesting outside the White House gate, and even being hauled off to jail by the police for refusing to leave the grounds....A final illustration shows the triumphant Paul on her way to vote in the 1920 election. This is an engaging introduction to an important and often neglected historical figure." — Myra Zarnowski, School Library Journal