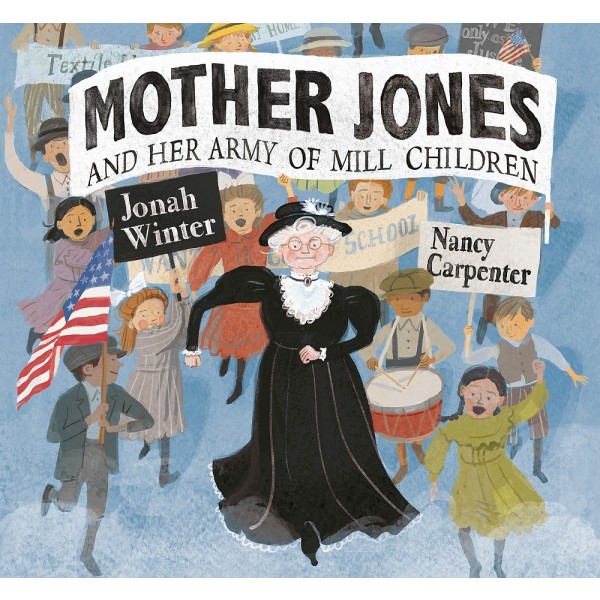 Mother Jones And Her Army of Mill Children

Mother Jones is MAD, and she wants you to be MAD TOO, and stand up for what's right! Told in first-person, New York Times bestelling author, Jonah Winter, and acclaimed illustrator, Nancy Carpenter, share the incredible story of Mother Jones, an Irish immigrant who was essential in the fight to create child labor laws.

Well into her sixties, Mother Jones had finally had enough of children working long hours in dangerous factory jobs, and decided she was going to do something about it. The powerful protests she organized earned her the name "the most dangerous woman in America." And in the Children's Crusade of 1903, she lead one hundred boys and girls on a glorious march from Philadelphia right to the front door of President Theodore Roosevelt's Long Island home. This is a stunning picture book about Mary "Mother" Jones and the children who marched from Philadelphia to New York in a fiery protest against child labor.

"Using Jones’s folksy voice, Winter whirls readers into descriptions of abominable working conditions, where 'children YOUR AGE... worked like grown-ups'.... Carpenter’s illustrations adroitly capture both the grim reality of children at work and the irresistible hope of people coming together to demand change. Supplemental materials note that 'worldwide, there are 215 million child workers' yet today." — Publishers Weekly