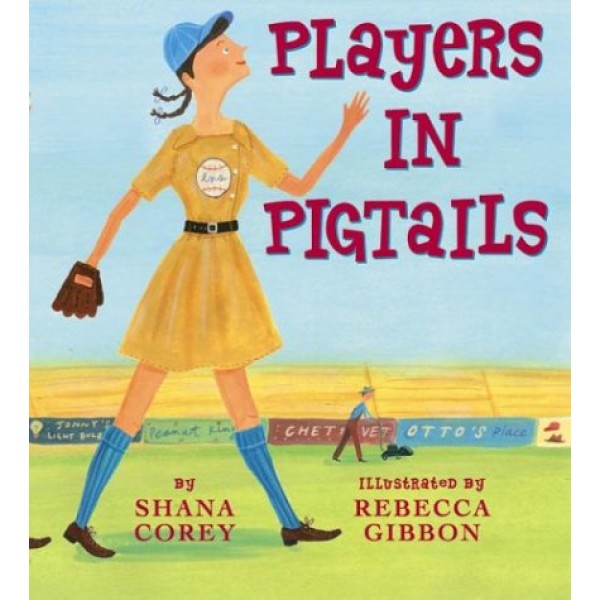 A winning new picture book about the All American Girls Professional Baseball League--written with sass and style by all-star Shana Corey with illustrations from promising young rookie Rebecca Gibbon.

Did you know that one of America's favorite songs, "Take Me Out to the Ball Game," was written about a girl? And that in the 1940s girls all across America were crazy for our country's favorite game?

These little known facts inspired Shana Corey to imagine a story about how one determined girl made her way to the big leagues and found a sisterhood of players in pigtails. With the same exuberant spirit that fueled the formation of the All American Girls Professional Baseball League, joyful text and jubilant pictures celebrate these brave girls' love of the game & the league they called their own.

Katie Casey is in a league of her own: "She preferred sliding to sewing, batting to baking, and home runs to homecoming." Unfortunately, baseball is not considered ladylike in 1942. But when the male professional baseball players are called away to war, Katie has her chance to step up to the plate. Players in Pigtails, inspired by the movie A League of Their Own, is a delightful tribute to the All-American Girls Professional Baseball League created by Chicago Cubs owner Phillip Wrigley during World War II.

When author Shana Corey (Milly and the Macy's Parade, You Forgot Your Skirt, Amelia Bloomer!) discovered that the lyrics of the popular 1908 song "Take Me Out to the Ball Game" featured a "baseball-mad" girl named Katie Casey, she simply had to share the story with children. Illustrator Rebecca Gibbon captures a gleeful era of women's baseball in cheerful colors and carefully researched 1940s styles. Young readers will enjoy this exuberant, well-paced picture book about good old-fashioned girl power, complete with an informative and engaging author's note about the girls' league along with the lyrics to both "Take Me Out to the Ball Game" and the official "Victory Song" of the AAGPBL. -- Karin Snelson