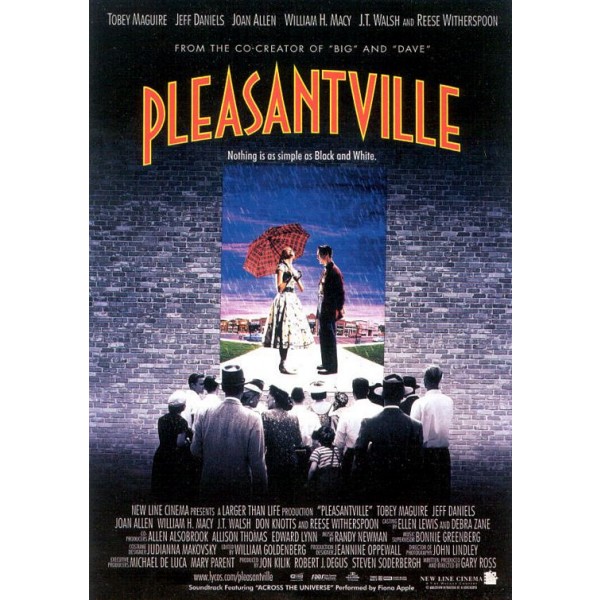 Fantastical writer Gary Ross (Big, Dave) makes an auspicious directorial debut with this inspired and oddly touching comedy about two '90s kids (Tobey Maguire and Reese Witherspoon) thrust into the black-and-white TV world of Pleasantville, a Leave It to Beaver-style sitcom complete with picket fences, corner malt shop, and warm chocolate chip cookies. When a somewhat unusual remote control (provided by repairman Don Knotts) transports them from the jaded real world to G-rated TV land, Maguire and Witherspoon are forced to play along as Bud and Mary Sue, the obedient children of George and Betty Parker (William H. Macy and Joan Allen). Maguire, an obsessive Pleasantville devotee, understands the need for not toppling the natural balance of things; Witherspoon, on the other hand, starts shaking the town up, most notably when she takes basketball stud Skip (Paul Walker) up to Lover's Lane for some modern-day fun and games. Soon enough, Pleasantville's teens are discovering sex along with--gasp!--rock & roll, free thinking, and soul-changing Technicolor.

Filled with delightful and shrewd details about sitcom life (no toilets, no double beds, only two streets in the town), Pleasantville is a joy to watch, not only for its comedy but for the groundbreaking visual effects and astonishing production design as the town gradually transforms from crisp black and white to glorious color. Ross does tip his hand a bit about halfway through the film, obscuring the movie's basic message of the unpredictability of life with overloaded and obvious symbolism, as the black-and-white denizens of the town gang up on the "coloreds" and impose rules of conduct to keep their strait-laced town laced up. Still, the characterizations from the phenomenal cast--especially repressed housewife Allen and soda-shop owner Jeff Daniels, doing some of their best work ever--will keep you emotionally invested in the film's outcome, and waiting to see Pleasantville in all its final Technicolor glory. -- Mark Englehart