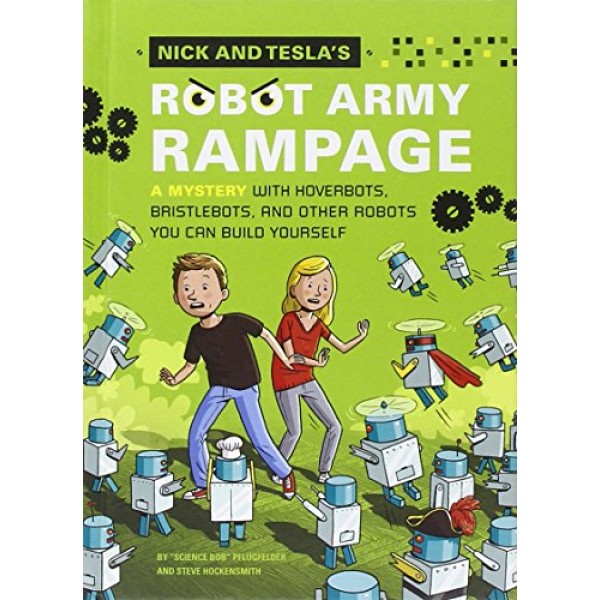 Nick and Tesla's Robot Army Rampage: A Mystery With Hoverbots, Bristle Bots, and Other Robots You Can Build Yourself

Nick and Tesla return in an all-new, robot-filled adventure! When a rash of robberies hits the town of Half Moon Bay, 11-year-old sleuths Nick and Tesla are determined to catch the criminal -- but to do so, they'll have to build a host of new gadgets and gizmos!

In this robot-themed follow-up to Nick and Tesla's High-Voltage Danger Lab, the brother-and-sister duo build four different droids out of ordinary household objects -- and illustrated instructions are included throughout the story, so you can build them, too! Make bristlebots that buzz, hoverbots that float above the ground, battlebots that duke it out, and more! Can Nick and Tesla catch the criminal mastermind -- and foil his army of rampaging robots -- before it's too late?

"Authors "Science Bob" Pflugfelder and Hockensmith have further developed their characters, while incorporating real science, this time in the form of robots. Step-by-step directions are included using mostly everyday objects, so readers can construct their own hoverbots and robo-roaches, while trying to decipher the clues to the mystery. With a love interest for Uncle Newt, a strong science-loving young girl, and perfectly executed red herrings, this mystery stands alone." -- Michele Shaw, School Library Journal